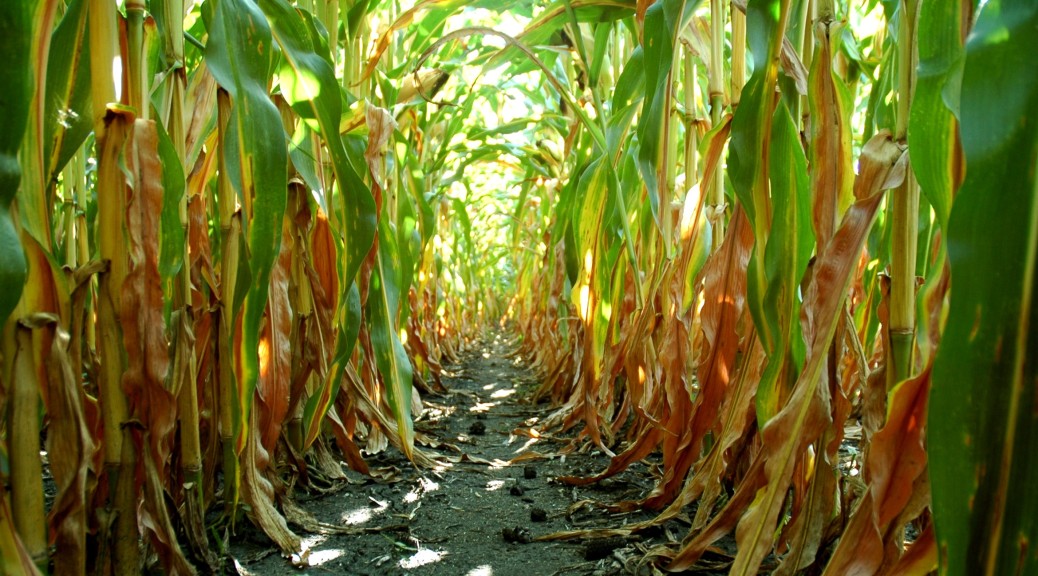 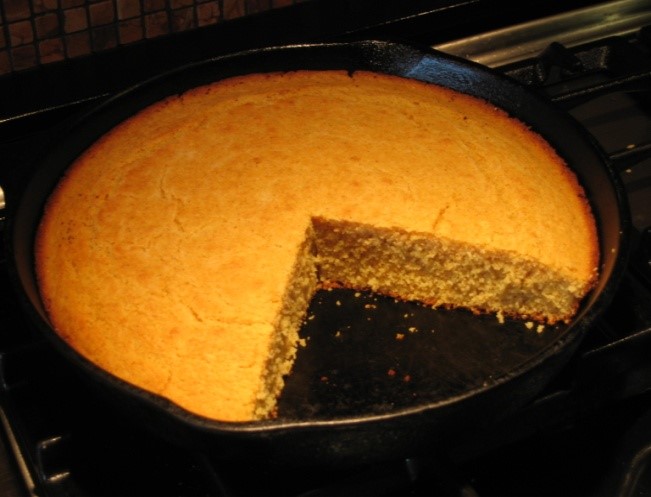 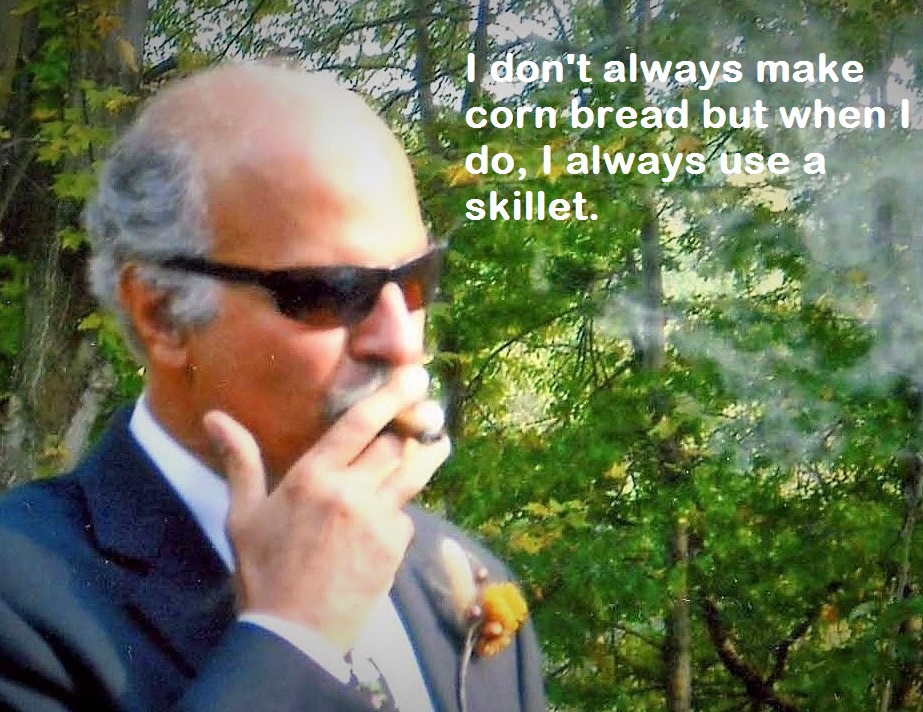 I was in the South often enough to develop an appreciation for corn bread but when I buy it here in New York, it’s usually too crumbly and sweet. Not really bread at all but more like a corn muffin. Ok for breakfast but it doesn’t stand up beside real food. I tried a few recipes but couldn’t quite get what I wanted until I asked my friend Lindsey Prokscha, baker extraordinaire, for some help. She made a few tweaks and this is the result. 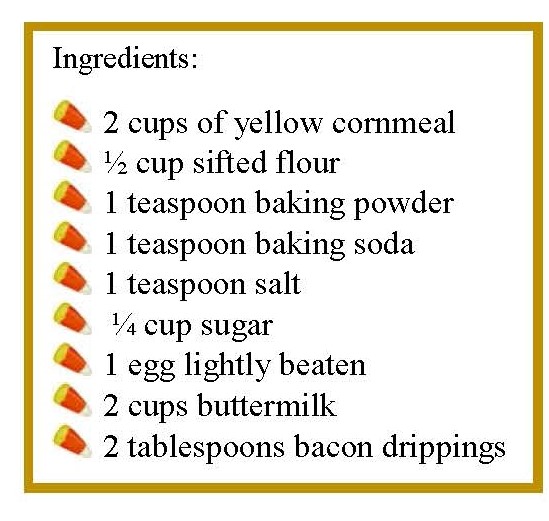 Start by preheating your oven to 450 degrees.

Mix the corn meal, flour, baking powder & soda, salt and sugar. In a separate bowl the whisk egg and buttermilk then mix it with the dry ingredients. Heat the bacon drippings in a 10 inch cast iron skillet until it sizzles, coat skillet, then pour what remains of the bacon fat into the batter and stir it in,

Pour the batter into the hot cast iron skillet and bake in the oven for 20 minutes.

It should be firm and golden brown on top and pulling away from the sides of the skillet when it’s done.

Cornfield photo from The Kitchen Garden 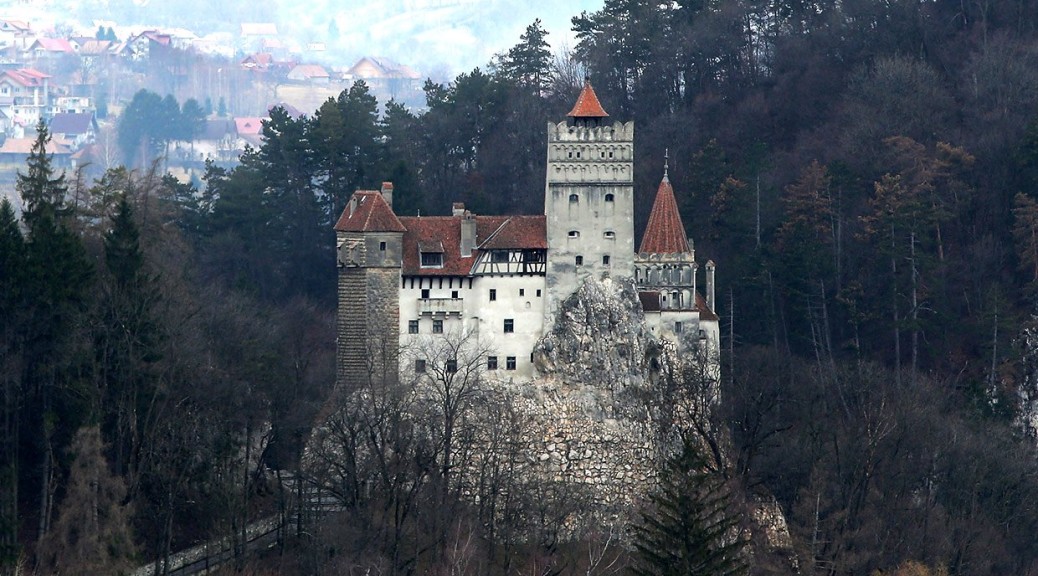 If any of you’ve read Dracula by Bram Stoker you might remember that Jonathan Harker, the London real estate broker, had to travel to Transylvania to conclude a deal with the Count who wanted to buy property in England. His first stop in Romania was at the Royal Hotel where he had paprika hendl for dinner. He liked it so much he noted in his journal, 3 May, Hotel Royale, Klausenburgh, Romania, “…must get recipe for Mina.” I don’t know if his wife Mina ever got it, the book takes a different turn in the next few pages, but I found the recipe. 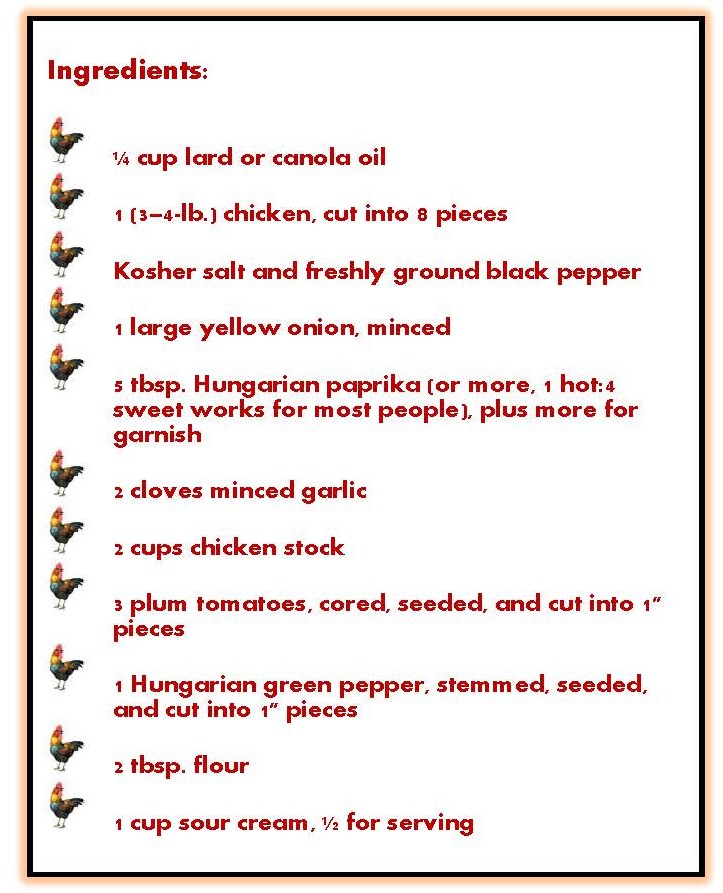 Season chicken with salt and pepper. Melt lard or heat oil in a 6-qt. saucepan over medium-high heat. Working in batches, cook, flipping once, until browned. Transfer chicken to a plate and set aside.

Add tomatoes and simmer for a few minutes. Add stock and mix. Return chicken skin side up and its juices to the pan and bring to a boil. Reduce heat to medium-low and simmer, partially covered, until chicken is fully cooked, about 30 minutes. 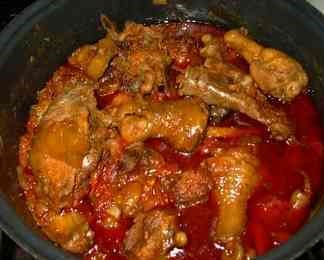 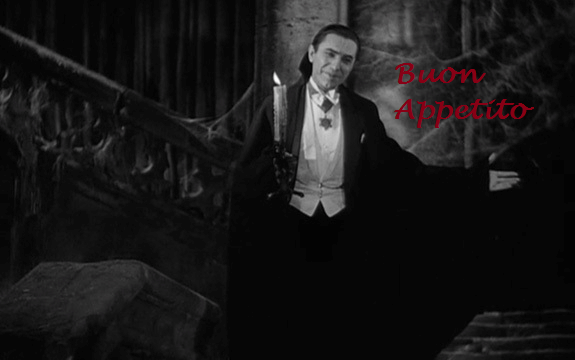 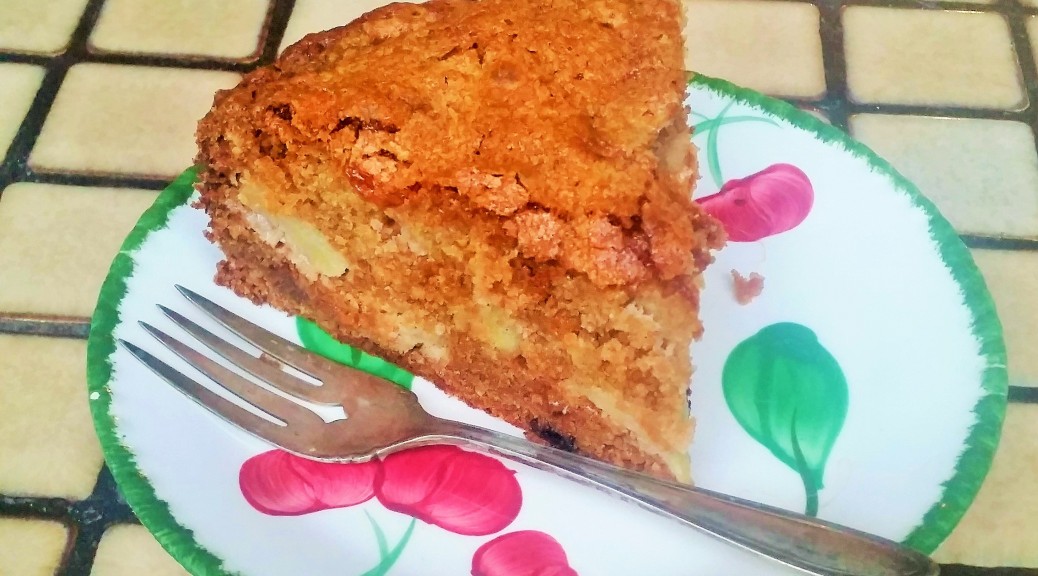 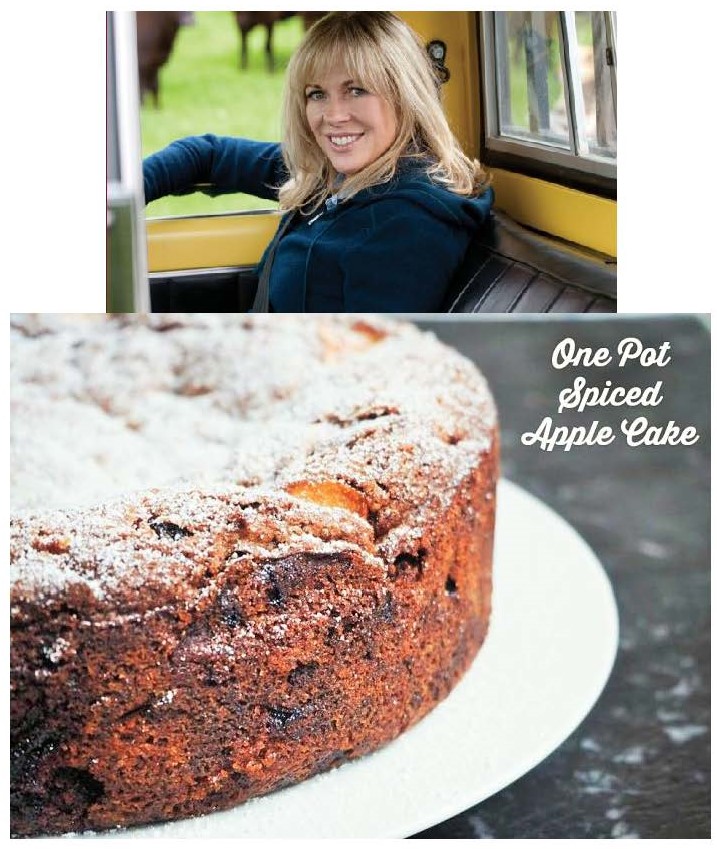 I don’t bake much and don’t make too many desserts either but this is an exception. I happened to catch a cooking show on PBS and was very impressed by the chef. Her name is Annabel Langbein and the show is The Free Range Cook. It’s recorded at her home and on location in New Zeeland.

Here’s a recipe for an Annabel’s apple cake (she calls it One Pot Spiced Apple Cake). There are no fussy measurements, techniques and temperature controls to deal with. You don’t need a food processor or blender or any other special equipment. It’s simple and the result is good for dessert or breakfast.

(I converted grams and centigrade to US equivalents) 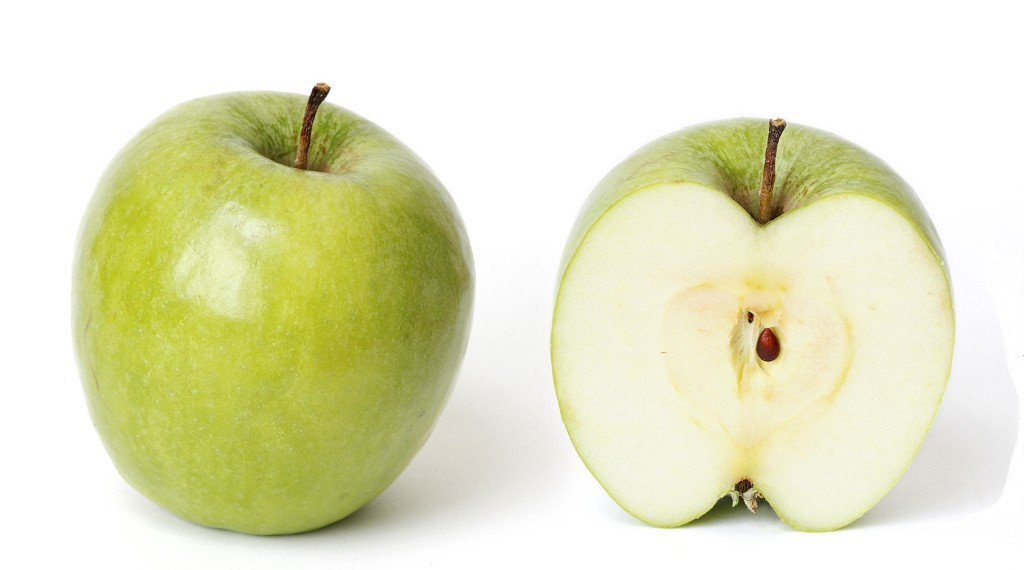 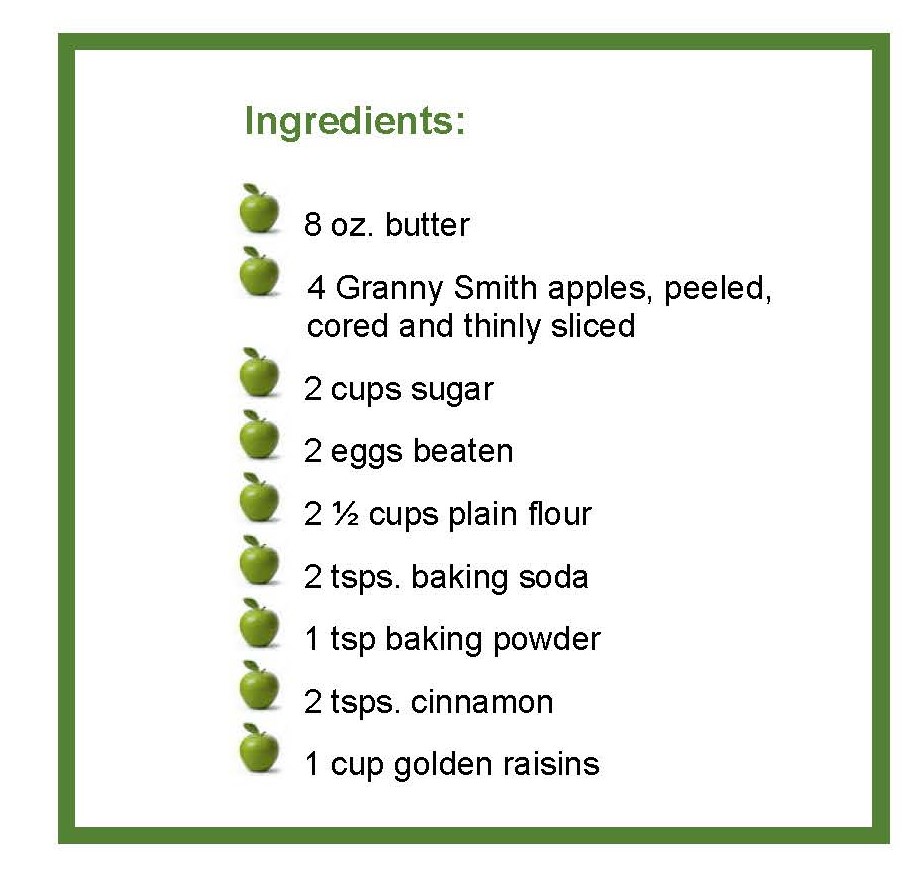 Pre-heat oven to 325o. Grease and flour the base and sides of spring cake pan.

Melt butter in large sauce pan on medium heat. Turn off heat and mix n apples and sugar, then eggs. Stir in flour, baking powder and soda, cinnamon and raisins. Stir to blend.

Pour it into the pan and bake for 1 hour 25 minutes, until risen and browned and top springs back when lightly pressed.

Cool in pan for 15 minutes and remove from pan. Let cool on a wire rack. 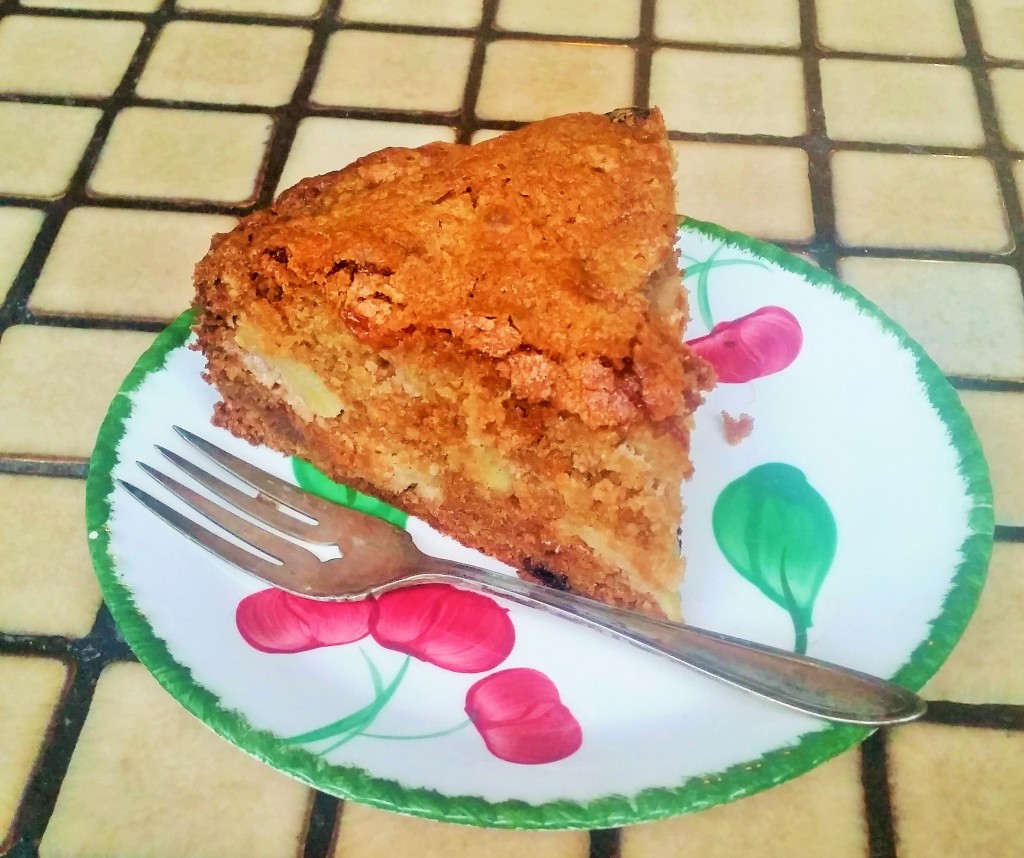 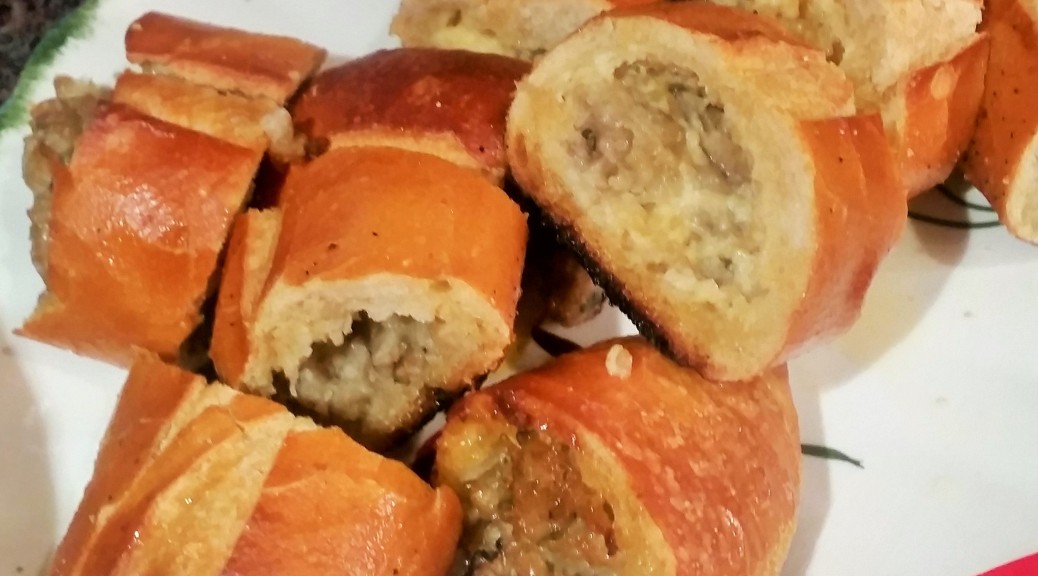 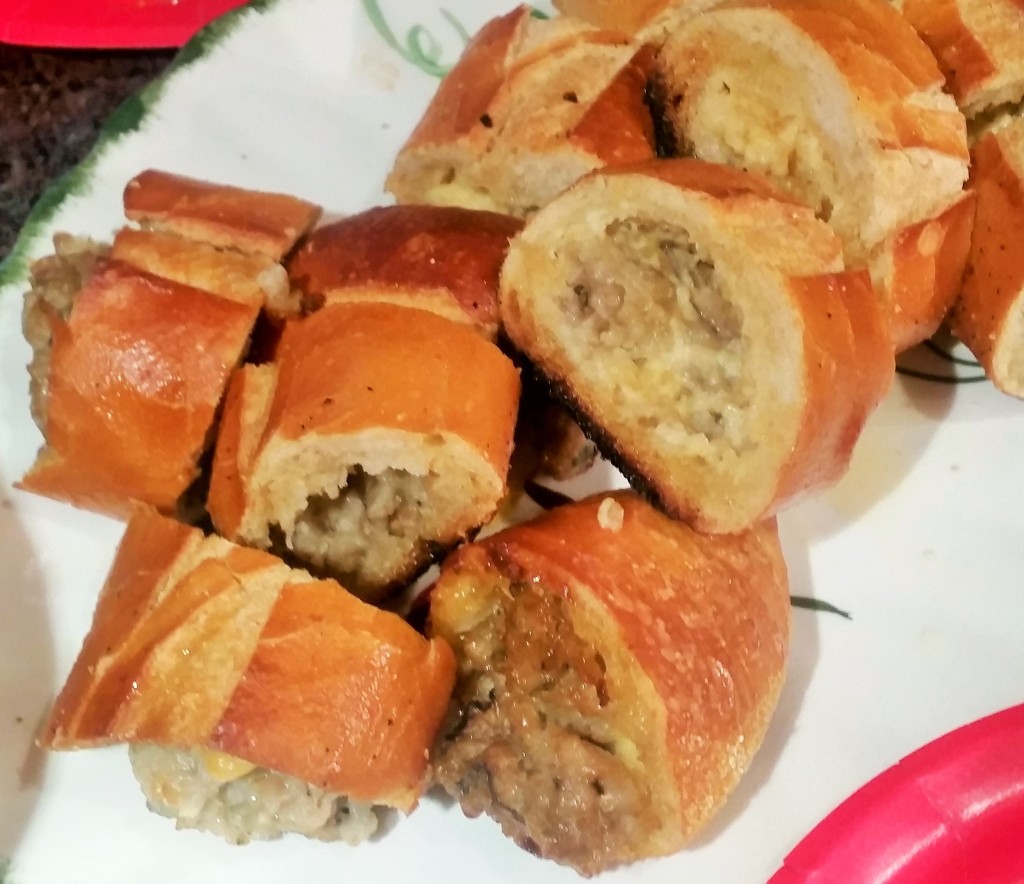 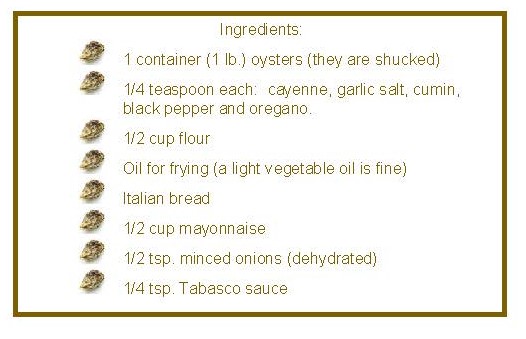 Mix the spices in a small bowl. Put the oysters with the liquid in a bowl. Stir half the spices into the oysters. Cover with plastic wrap and refrigerate for at least one hour.

Drain the oysters. Put the flour and the rest of the spices in a bowl and mix well. Dredge the oysters in the flour mixture. Fry them  in hot oil (the oil should be at least 2 inches high in the pan) until golden brown. Remove with a slotted spoon and drain on paper towels.

Cut the Italian bread in half (DO NOT CUT THE BREAD AS YOU WOULD FOR A SANDWICH) and scoop out the inside doughy part down to the heel. Spread the mayonnaise mixture into the bread. Stuff the bread with the oysters. Slice the bread into one-inch pieces and bake in a 350 degree oven for 20 minutes. Oyster bread is an excellent appetizer. 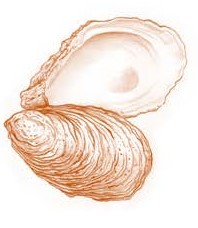 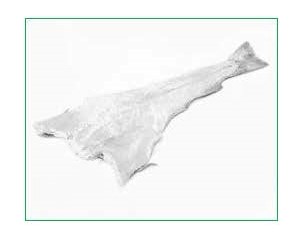 “… A standard is baccala, dried cod fish, prepared both as a salad and a stew.  It’s so dry it resembles a plank of wood when you buy it.  Although caught and processed in the North Atlantic, dried cod has been a Mediterranean staple for centuries where the Norwegian klippfisk became the Italian baccala and the French morue.  It must be soaked in cold water for days, changing the water often, to soften it and remove the salt used in the drying process before you can even think about cooking it.”  –  La Cucina Povera

In order to prepare baccala it must be soaked in cold water at least two days prior to cooking.  Baccala can be bought in a supermarket.  It comes in a package.  Buy the boned baccala.  If the supermarket doesn’t have it you can go to an Italian market.  This baccala will be dried and resemble a fossil.  Either one is fine, but both must be soaked in cold water. Put the baccala in a container and cover with cold water.  Loosely cover the container and change the water two times a day by running cold water over it for a few minutes. 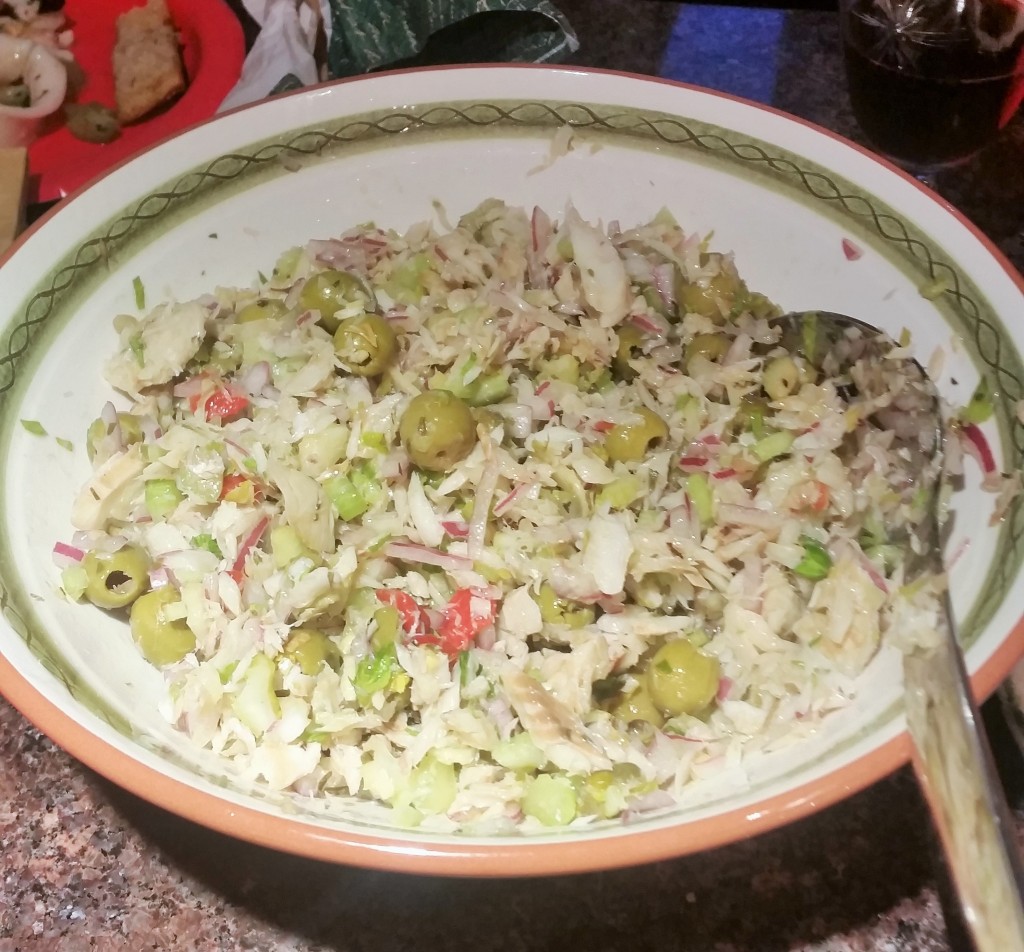 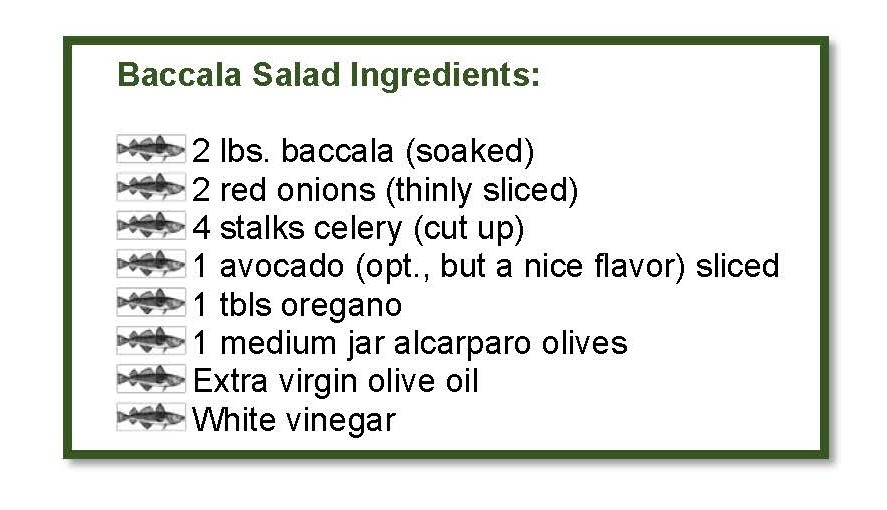 Rinse the baccala and put it up to boil in a large pot of water.  Do not salt the water.

The fish may still be salty.  Season to taste afterwards.  Bring to a rapid boil and cook for five minutes.  Drain in a colander.  Flake the baccala with your fingers when cool.

Place the fish in a large bowl and add the sliced onions, celery and avocado.  Mix it well.  Add the oil and vinegar.  Sprinkle with the oregano.  Drain the liquid from the jar of olives and add to the bowl.  Mix well.  Taste the salad before adding salt.  Add pepper to taste.  This salad can be prepared in advance then refrigerated. 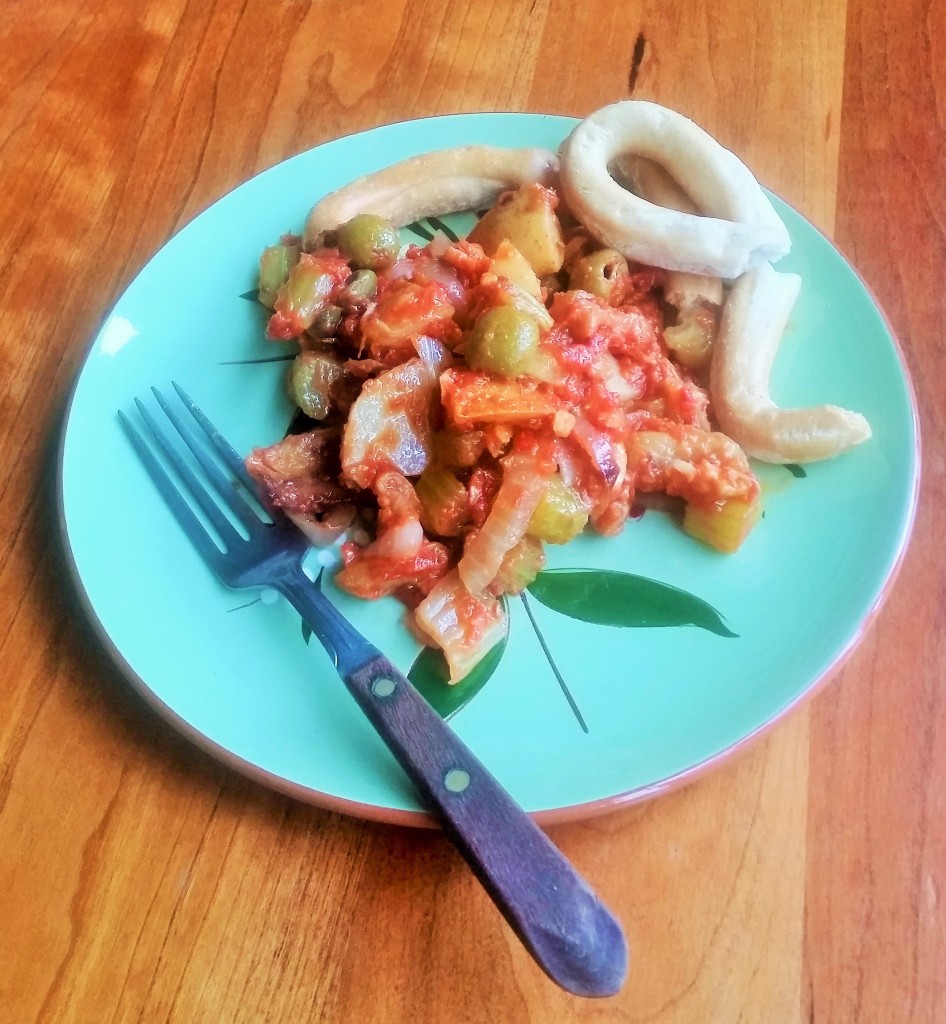 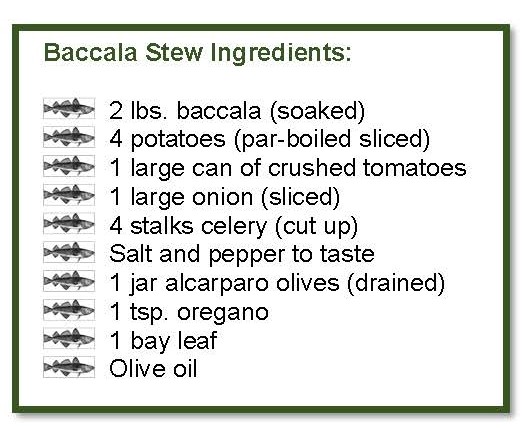 Although the ingredients are similar to the baccala salad this stew has an entirely different flavor.

Coat the bottom of a deep baking pan with oil.  Add the baccala, par-boiled potatoes, onions and celery, olives, oregano and bay leaf.  Mix them well.  Pour the can of crushed tomatoes over the top of the mixture.  Sprinkle the oregano over the top.  Make sure the tomatoes get down to the bottom of the pan.  This can be done by jiggling the pan carefully or by placing a slotted spoon in the mixture and moving it around a bit.  Bake in a pre-heated 350o oven for approximately 45 minutes or until the potatoes are cooked.  Serve hot with Italian bread.