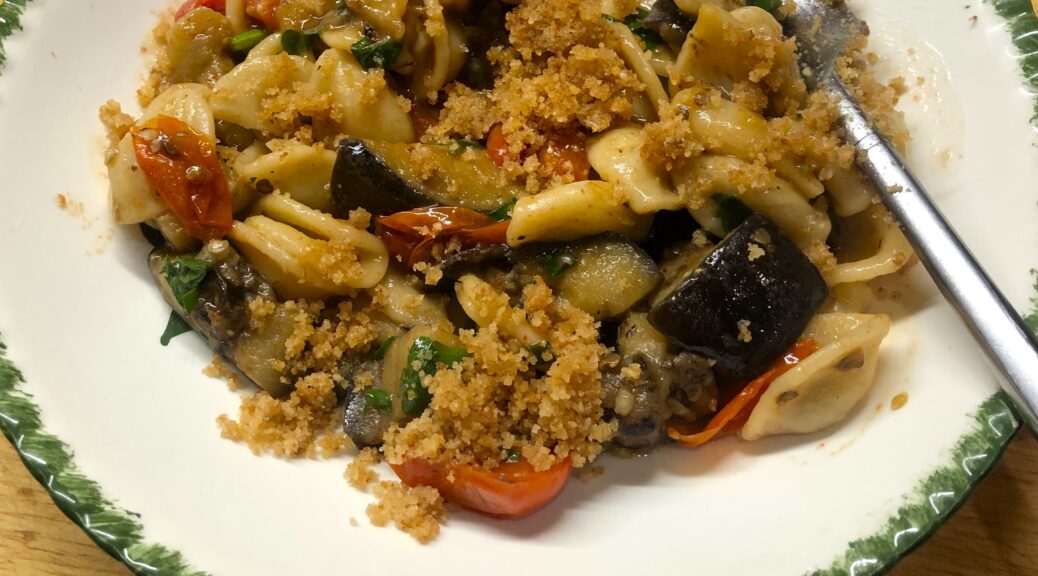 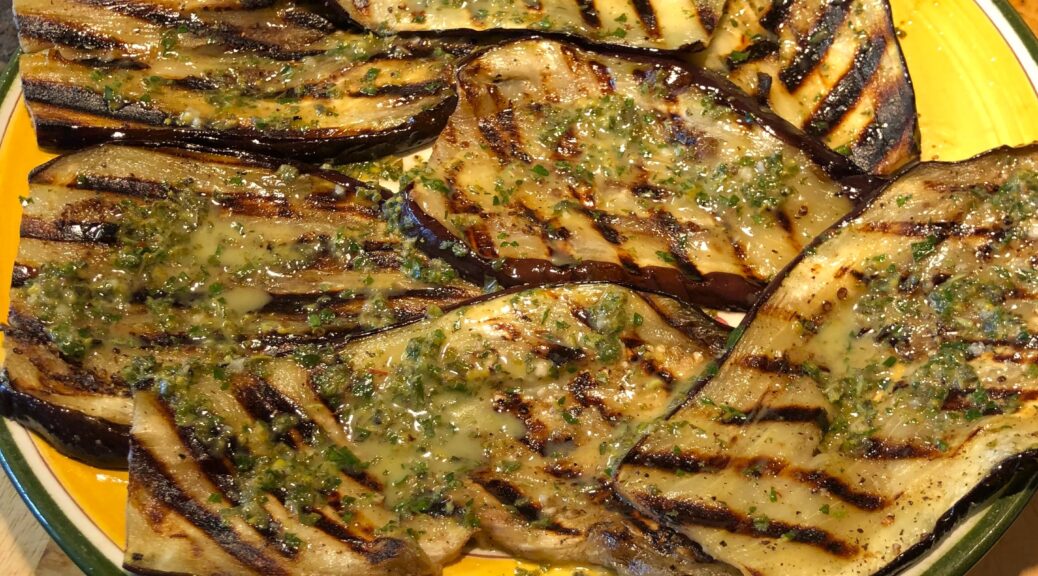 I know people who said they didn’t like eggplant until they tried it done like this. Grilled eggplant can be served room temperature or chilled as a part of an antipasto, side dish or on a sandwich. Trim the stem ends off the eggplants and slice lengthwise, about ¼-inch thick. Lay the eggplant slices on paper towels and sprinkle salt on both sides. Wait 15 minutes and blot up moisture. Heat the oil in a small pan, add salt, black and red pepper and lightly sauté the chopped garlic. Add the herbs, lemon zest/juice, and the garlic/oil mixture to a blender, food processor or if you need the exercise use a mortar and pestle. While you heat your grill (charcoal, gas, or a grill pan), use a brush to lightly coat each eggplant slice with olive oil, then sprinkle with salt and pepper.  Place the eggplant slices on the grill oil side down and add oil, salt, and pepper to the top side of the eggplant. After you get nice grill marks on one side, turn and grill the other side. They cook fast so watch them. 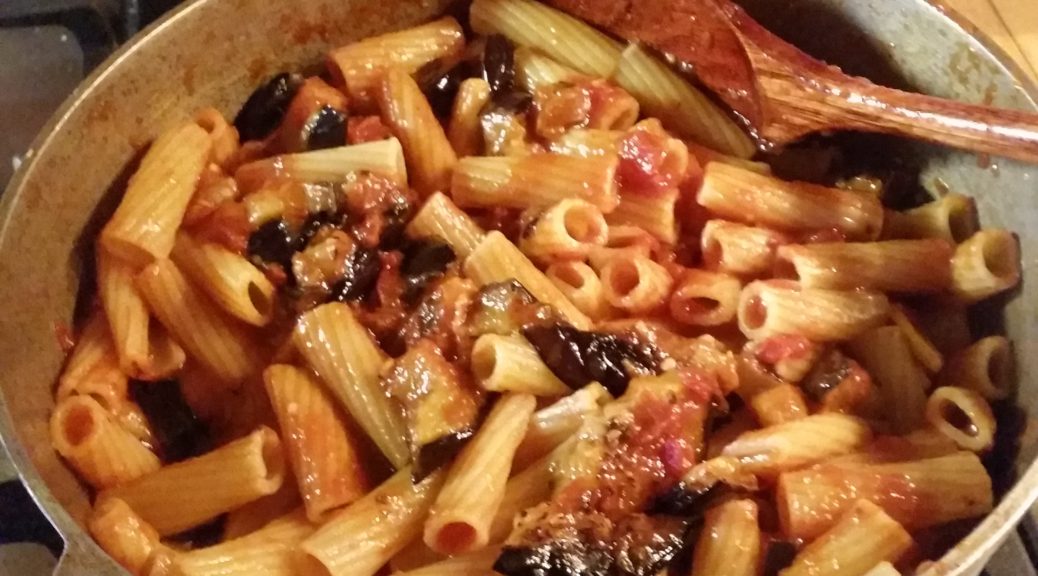 This is a Sicilian recipe that my Aunt Lena, who married a Sicilian, used to make. She called it simply “rigatoni with eggplant.” I didn’t learn that it was formally known as “Pasta alla Norma” until I was an adult. It was named for the heroine in Bellini’s Norma. * Ricotta salata comes in 2 types – fresh for eating and dry for grating. If you can’t get it, use parmigiana. Slice the eggplant into about 1/2-inch rounds (don’t peel it). Salt and drain it. Cook it over medium-high heat in a pot, in olive oil adding more oil as needed. Do it in batches so it doesn’t crowd. Cook it until it’s browned and soft. Don’t worry about a few burnt edges – that adds flavor. Move it to a plate and don’t drain it or put it on paper towels. Meanwhile, put up a pot of salted water to boil for the pasta.

Using the same pot the eggplant was cooked in, add some oil and on medium heat fry garlic with salt, black pepper and red pepper. After a few minutes when the garlic begins to color, add the tomatoes. Cook for about 20-25 minutes on medium. Taste for seasoning.

Cook the pasta until almost done. Cut the eggplant into approximately 1-inch pieces (they’ll be irregularly shaped and that’s OK) and add to the tomato sauce. Gently stir it in. Drain the almost cooked pasta (saving a cup of pasta water in case the sauce is too dry) and toss it with the sauce. Again, gently, so the eggplant doesn’t break up too much. Serve with freshly grated  ricotta salada. 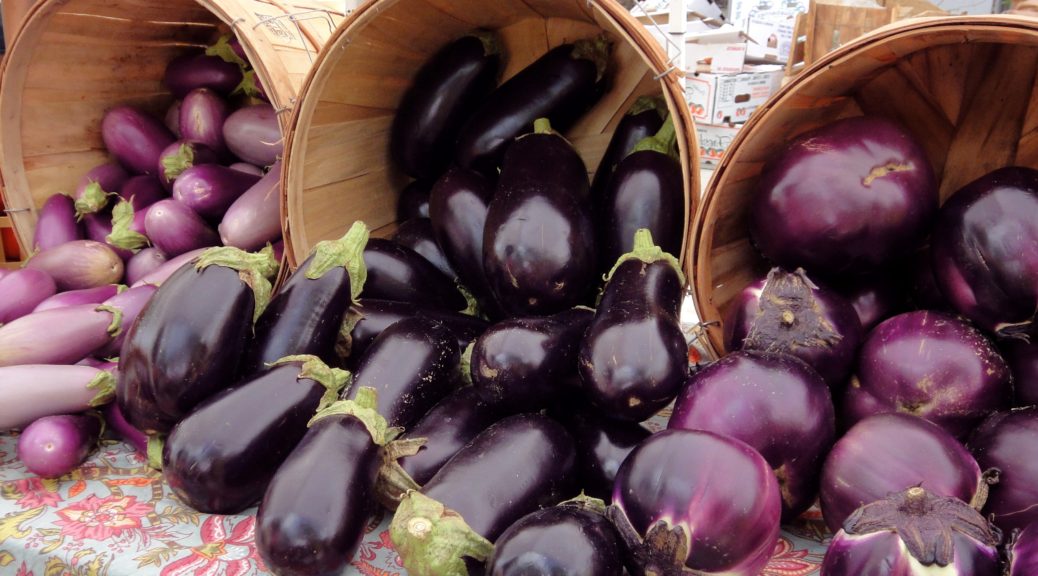 I’ll call this caponata for the sake of the search engines but in our dialect it’s gabaladine. It’s a standard component of any good antipasto. This is my Aunt’s recipe which she passed on to my daughter Kristina. My sister Nicki  precisely measured all of the ingredients so I’ll turn it over to her. Her given name was Celeste; we called her Aunt Tootsie, Grandma called her “Toots”. Aunt Tootsie lived with Grandma her whole life (even after she married, twice). Living with Grandma had its advantages for her because she cooked just like Grandma, which was excellent. We would go “over the river and through the woods to Grandmother’s house”, which was in Brooklyn for a holiday or special occasion and Aunt Tootsie did all the cooking under Grandma’s supervision. She always had the phonograph on, singing along with Jimmy Roselli and Louis Prima. She would belt out, “Ti voglio bene” at any given moment. Here is her recipe for caponata.