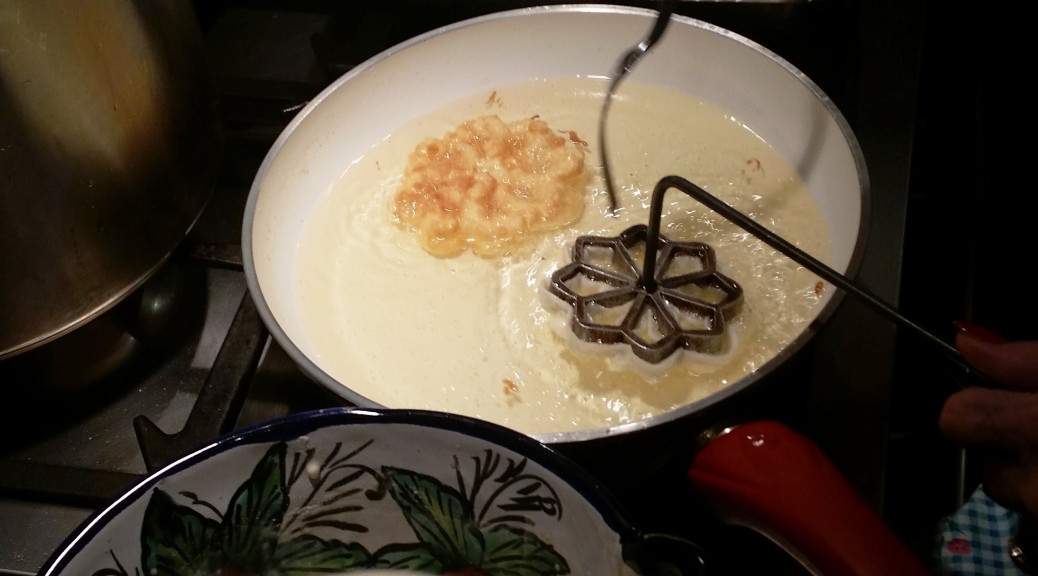 “If you get the knack immediately, these are the easiest and prettiest desserts to make; if you don’t – you are doomed.” – Nicki 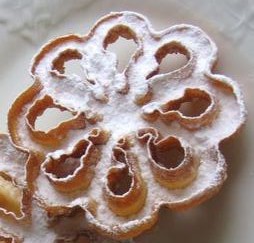 In order to make the rosettes you must have the “irons”.  These can be purchased in any good house ware store.  Irons come in different shapes and sizes, but I only use the rosette shape, probably because it is the only one I have had for the past 30 years. 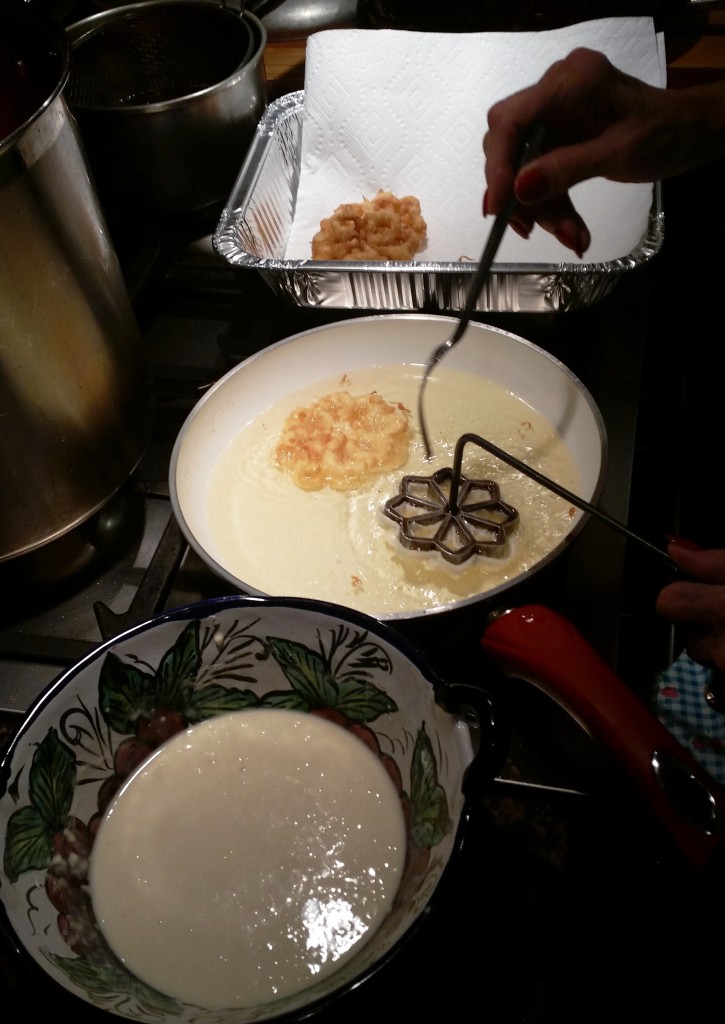 Mix all the ingredients well in a small bowl.  Let it stand for five minutes.  Place Crisco (not oil or butter, nothing but Crisco.  I once tried vegetable oil and had to throw them away.   I was not happy, so don’t even try anything but Crisco.  I don’t know why it works so well, but if it was good enough for my mother and it works, it’s good enough for me.) in a deep frying pan.  The Crisco must be very hot and deep enough to submerge the iron to heat it thoroughly.

When the iron is very hot take it out of the Crisco and put it into the batter.  IMPORTANT:  Do not cover the top of the iron with the batter, just up to the rim.  Then dip the batter-covered iron into the hot Crisco.  Hold the handle steady and the batter will fry and the rosette will come off the iron.  They may need a little coaxing with a fork.  Immediately dip the iron back into the batter.  (If the Crisco is hot enough, the iron is hot enough and the gods are with you this will go very smoothly.)  Turn the rosettes when they are golden.  Remove and drain on paper towels.

Place the drained rosettes in a pretty platter, drizzle them with honey and a good dusting of powdered sugar.  They are crisp delights and go well with Asti. 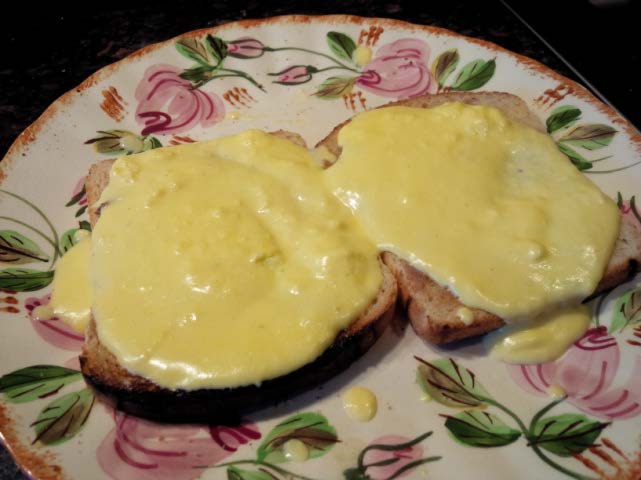 Taken verbatim from the 1861 Book of Household Management, by Isabella Beeton, Chapter XXXIII. Milk, Butter, Cheese and Eggs. I followed the “Mode” exactly, whisking over low heat until it thickened. The flavor was reminiscent of eggs Benedict. My father’s version of Scotch Woodcock is scrambling eggs with anchovies and milk, frying in butter and serving it on toast (see below). He said Scotch Woodcock was a late night snack that used to be served at bars in the 1930s and 40s along with Welch Rarebit. 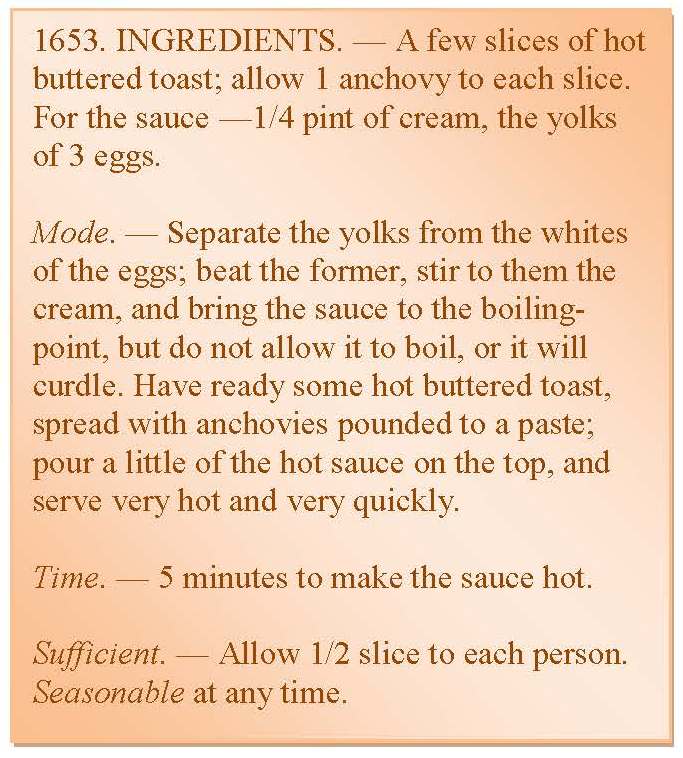 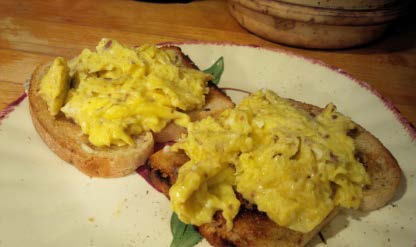 Sauté five or six chopped anchovies in four pats of butter and then add 1/4 cup of milk. Let it rest off the heat for about five minutes. Reheat, add four scrambled eggs and cook until done. Serve it on toast, salt and pepper.

For Italians, the celebration on the Eve is more elaborate than Christmas Day.  It a seafood dinner because until not too long ago it was a religious ‘day of abstinence.’ Some people call it the Feast of the Seven Fishes. I never counted but I think we have it covered.

My Aunt Lena got this recipe from a chef in Salerno.  He told her the idea was that a woman could be out with her boyfriend all day and serve this to her husband when he got home – with him thinking that it took her all day to cook it when it wasn’t cooked at all. Put the tomatoes in boiling water for a few minutes until the skin cracks, then run cold water over them and peel off their skin. Cut them in half across the core and squeeze out the seeds.  Finely chop and put them in a large serving bowl.  Add garlic, basil, parsley, salt & pepper and cover with ½ cup of olive oil.

The ingredients should all be at room temperature before mixing with 1 lb. just cooked spaghetti.  The heat from the hot pasta will be all it needs.

Raw Puttanesca  is kind of a light and delicate summery sauce that’s almost a salad, so no cheese unless you must.

Bridget and I were bike riding in Cape May and came across a yard sale. There were some nice old kitchen utensils among other thing. I saw a stove top deep fryer labeled, “$1.00 – Made the Best Crab Cakes.” The woman who was running the sale told me it was her mother’s. I said that if she gave me the recipe I’d buy the fryer and continue the tradition.

Here it is, Elaine Walls’ Cape May Crab Cake recipe: 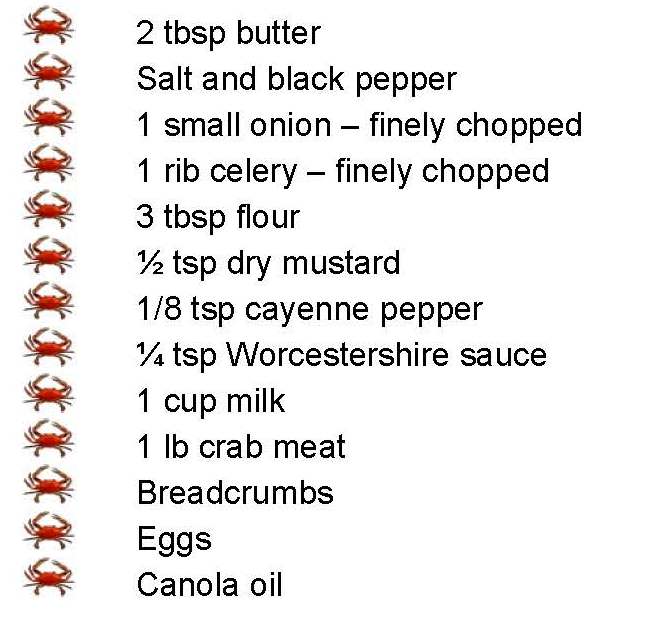 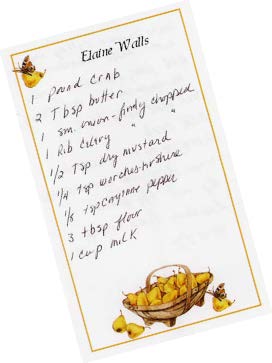 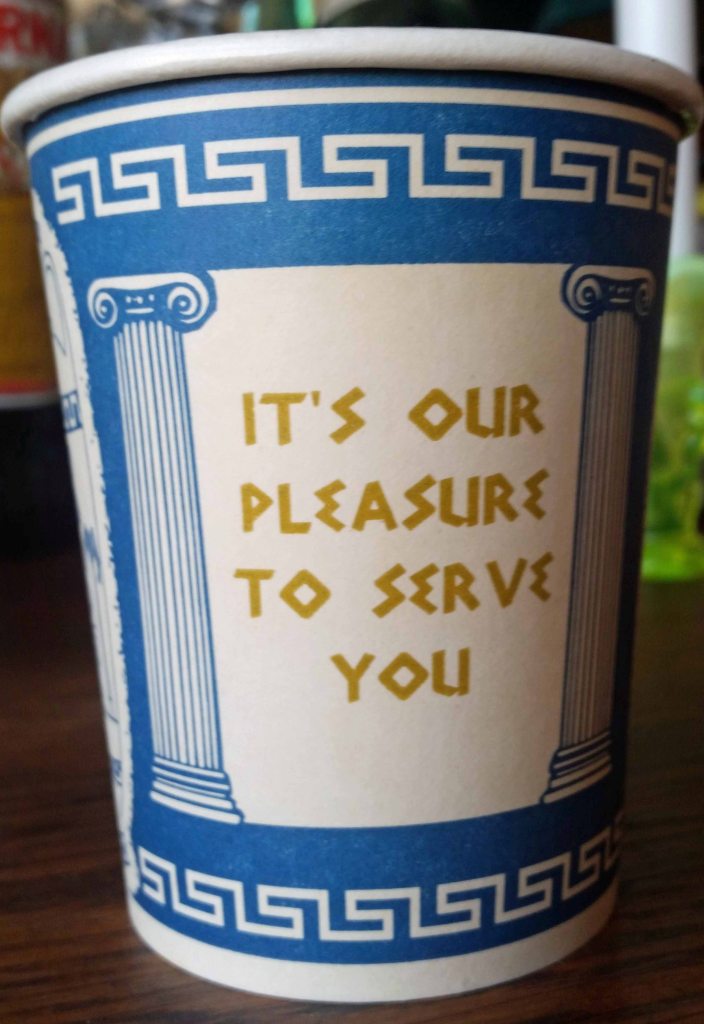 There are some places that want to be perceived as diners and others that are intrinsically and naturally diners. The latter, which are usually family run, can be recognized by very large menus, a few traditional Greek dishes on those menus, a huge selection of Danish, muffins and elaborate cakes displayed on and behind the counter and never letting your coffee cup get less than half full. They serve breakfast twenty-four hours a day and fast service is provided by people who are professional waiters and waitresses. Their coffee-to-go is usually in a blue and white paper cup with, “It’s Our Pleasure to Serve You,” framed by two Ionic columns.

Lately, in New York City, mostly Manhattan, a new type of chain diner has been opening. They try for a 1950’s retro style featuring Doo Wop interior design with old signs and maybe some muscle car parts hanging on the walls. Their menus list items with cute names that they want us to believe mythical Eisenhower-era Americans lived on; burgers, shakes and sundaes. Was there ever a “Malt Shop” in New York City? Maybe there was in television land where the Nelson boys and Donna Reed’s kids hung out after school but no, not New York. No matter how hard I try, I can’t imagine Edward Hopper’s “Nighthawks” sipping coffee in any of these Disneyfied places. There’s something contrived about the “new” diners that I would hate to see catch on.

I hope tourists don’t have a BLT at one of these theatre sets and think, “Wow, I’ve eaten in a New York City diner!” because they haven’t.

Some of the old favorites are gone now; the Market, Munson and Cheyenne, but there are enough of the originals left to easily give anyone who wants it, a genuine diner experience.

A handful of them still have waitresses with teased blond hair who will ask you, “What’cha havin’, hon?”

How could anyone give that up for a second-rate copy? 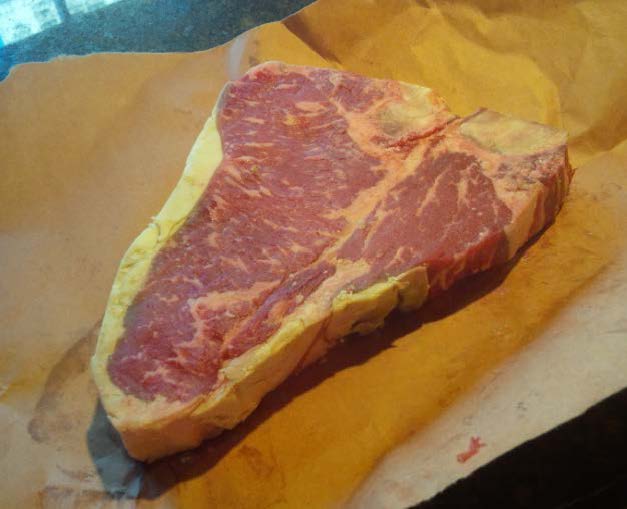 A few words on how to cook a steak… 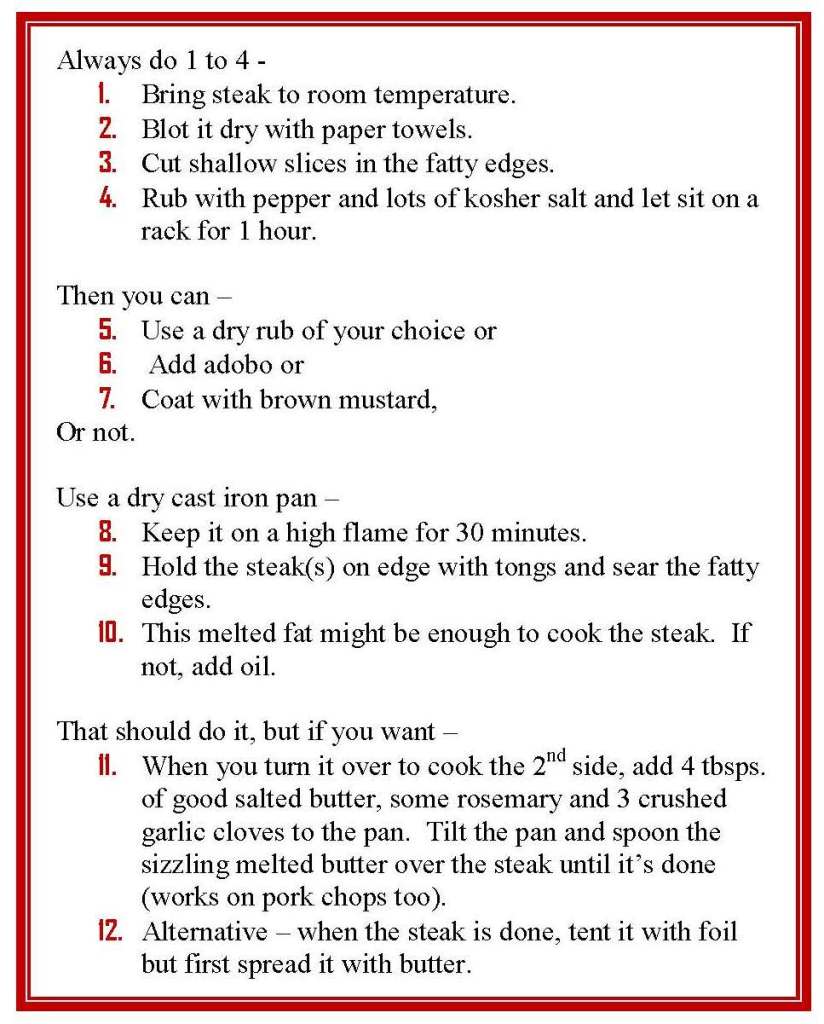 Porterhouse, the king of steaks, has a strip steak on one side of the bone and a tenderloin on the other. 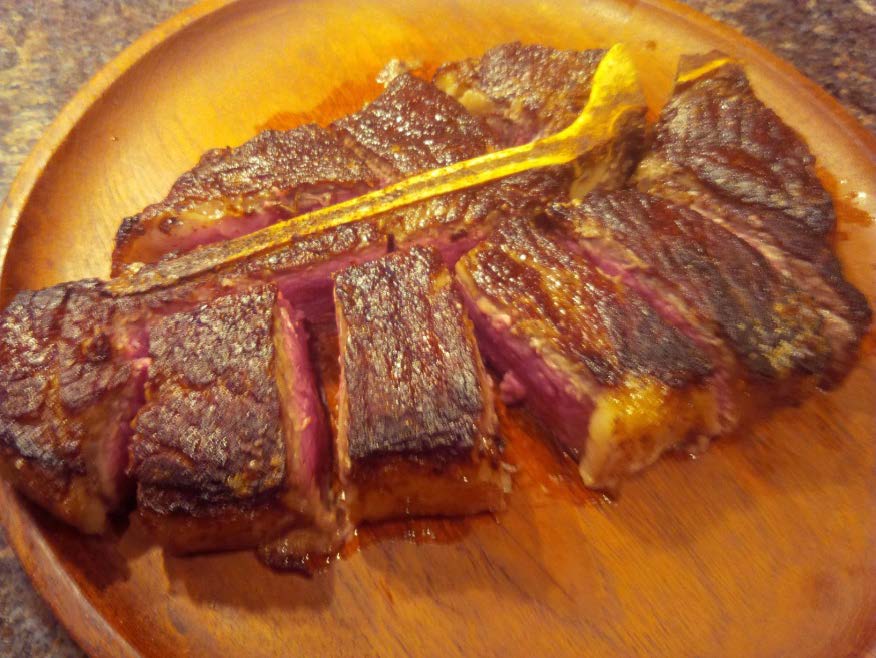 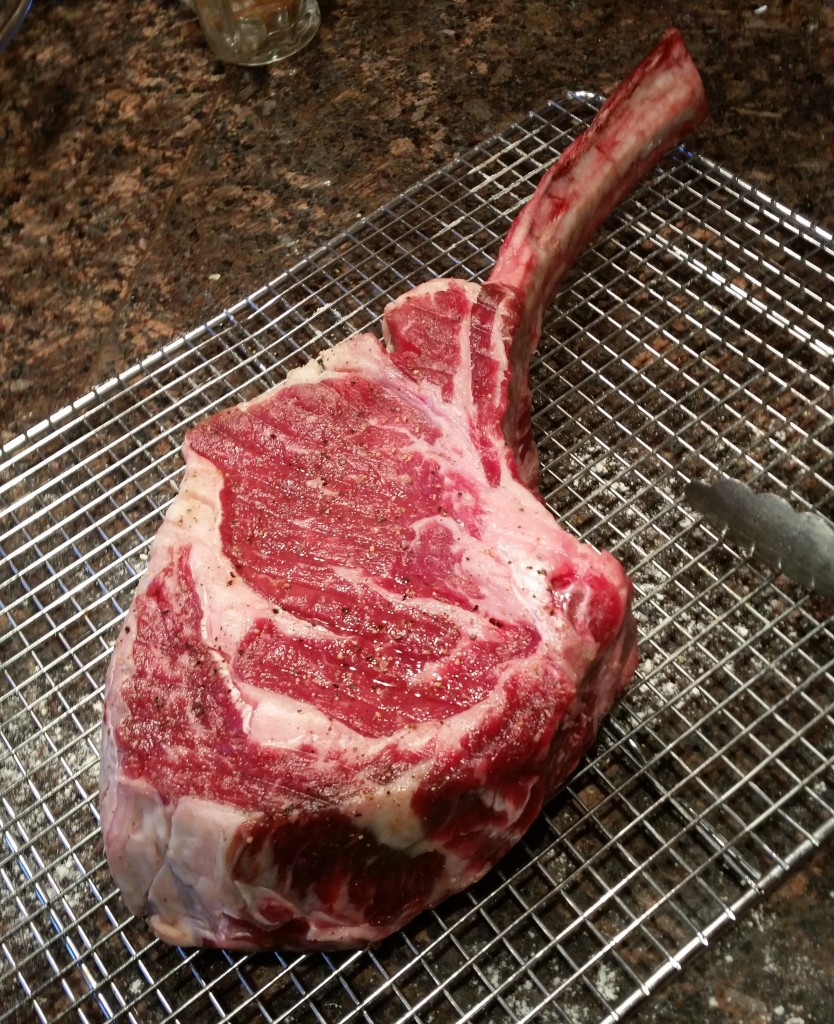 * A tomahawk steak is a rib steak with the entire rib bone intact.

We first tried this exceptional cocktail in New Orleans on my father’s recommendation. For the whole story click here – The Elusive Ramos Gin Fizz.

No substitute for any ingredient.

They may not really be smelts although that’s how they’re sometimes labeled. They’re between 2 and 3 inches long and you can find them in an Italian or Chinese fish market. Some people call them bait fish, shiners or Kellies, I call them the potato chips of the sea. My Aunt Vicki used to make them on Christmas Eve. She called them “fried little fish.”

Rinse ½ pound thoroughly in a strainer under running cold water. Leave them head to tail, fins and scales. Spread them out on paper towels and blot them as dry as you can. Put 3 tablespoons of flour and some salt and black pepper in a bag, add the fish, shake until they’re coated and then spread them out again.   Put about an inch of light oil in a pan and add the fish when it’s hot. Make sure to separate them before putting them in the pan because they’ll stay stuck together – a little tedious but worth it.

When they’re done add salt. Eat them while they’re hot with white wine or beer like potato chips. A great snack for guests hanging around the kitchen while dinner is cooking.

A tuna and lemon sandwich was one of my Uncle Charlie’s  standard late night snacks. 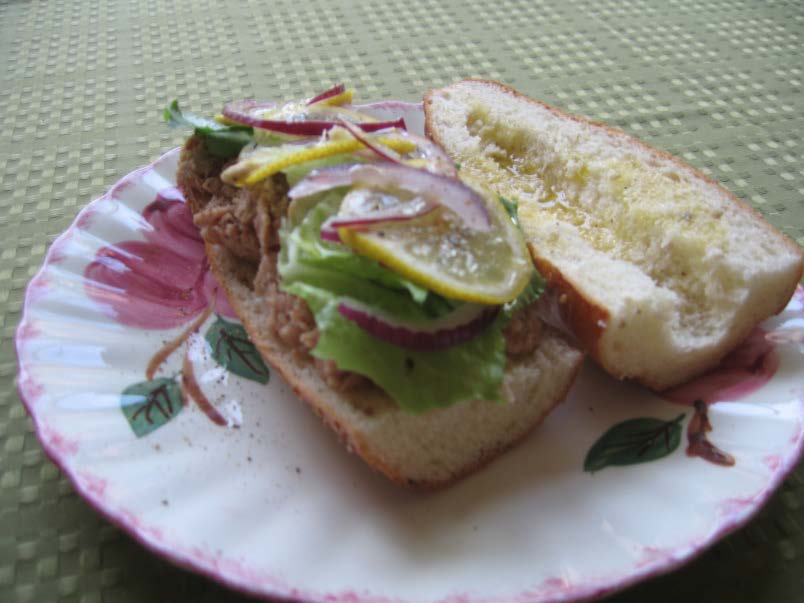 Drain the tuna and arrange it on the bread.  Add thinly sliced red onion and thinly sliced lemon (include skin). You’ll need a very sharp knife for this.  Sprinkle with plain or chili infused olive oil, salt and black pepper Add some Romaine if you like. This combination really works.