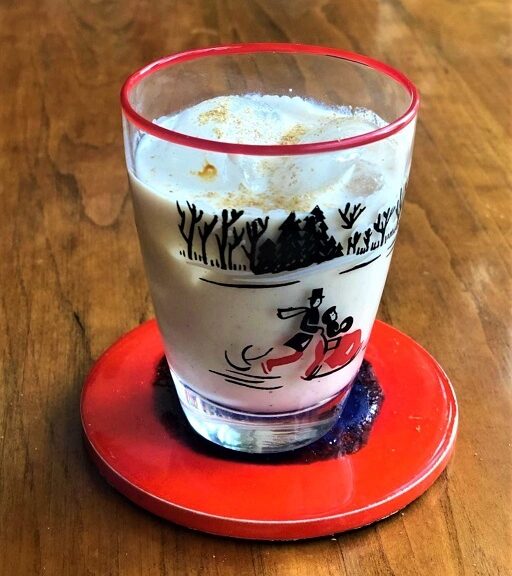 Coquito is similar to eggnog but without the egg, it’s a Puerto Rican holiday drink that tastes like coconut candy. Family recipes vary a bit but this one is pretty standard. If you want to serve it to kids, replace the rum with whole milk and add some non-alcoholic rum extract. 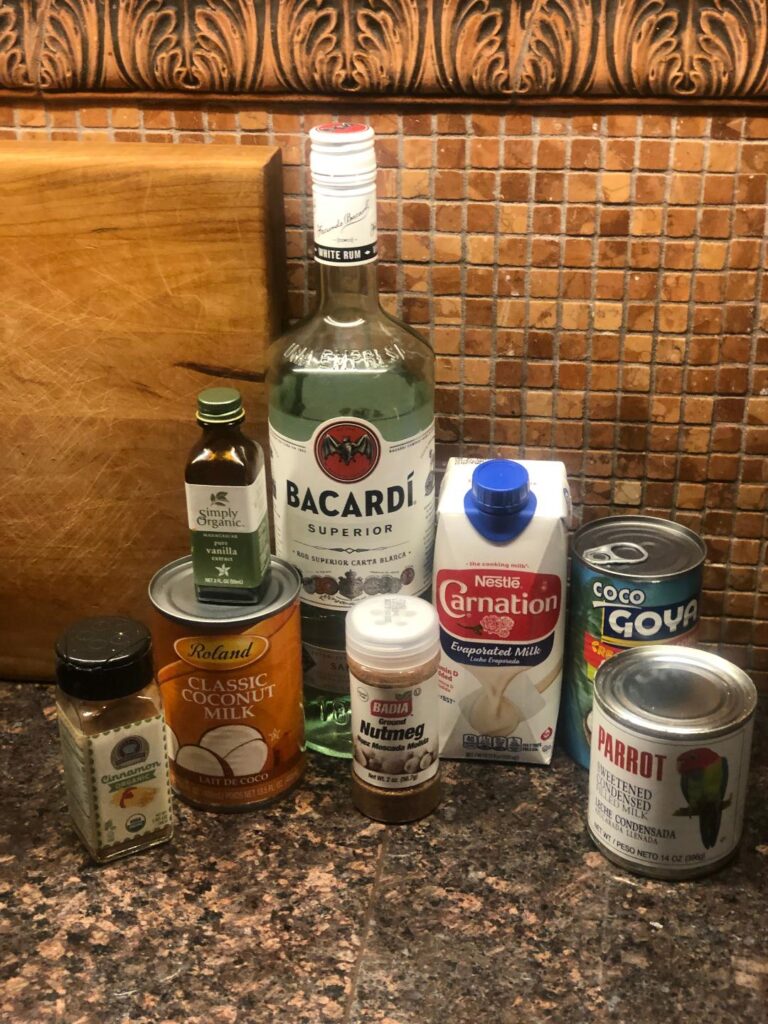 Pour the cream of coconut, evaporated milk, coconut milk, sweetened condensed milk, vanilla, cinnamon and nutmeg in a large saucepan. Heat on medium and stir until it well blended and starts to simmer. Remove from heat, and let it sit for 30 minutes. 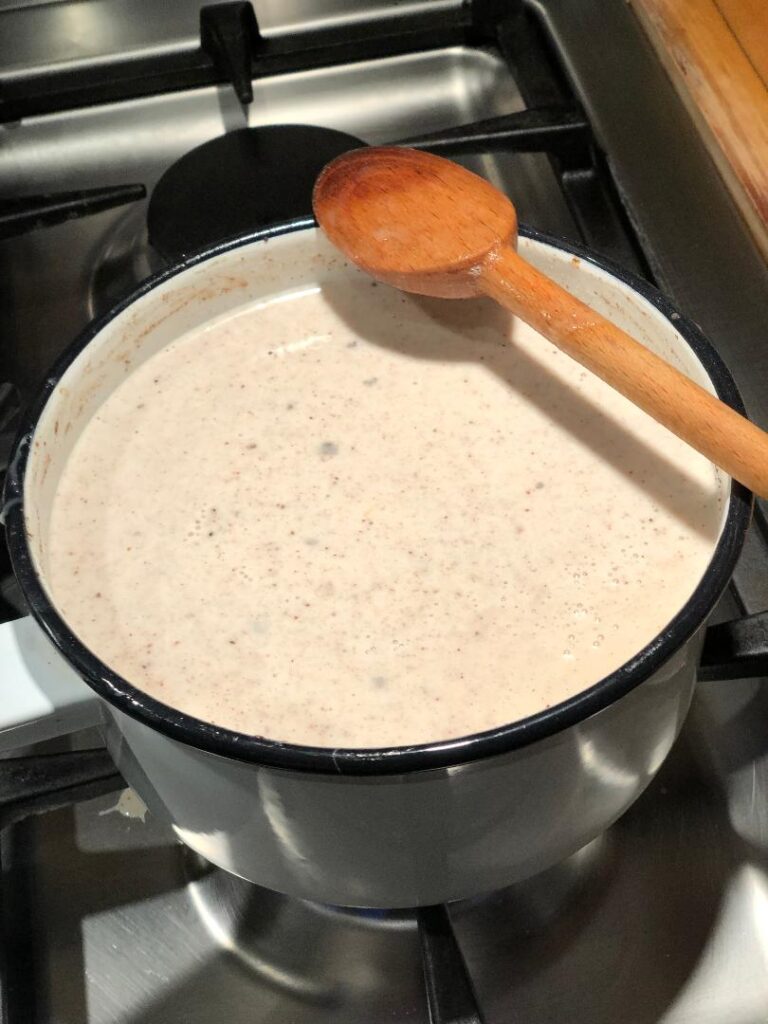 Add in the rum and chill. Serve cold or on the rocks with a sprinkle of nutmeg. 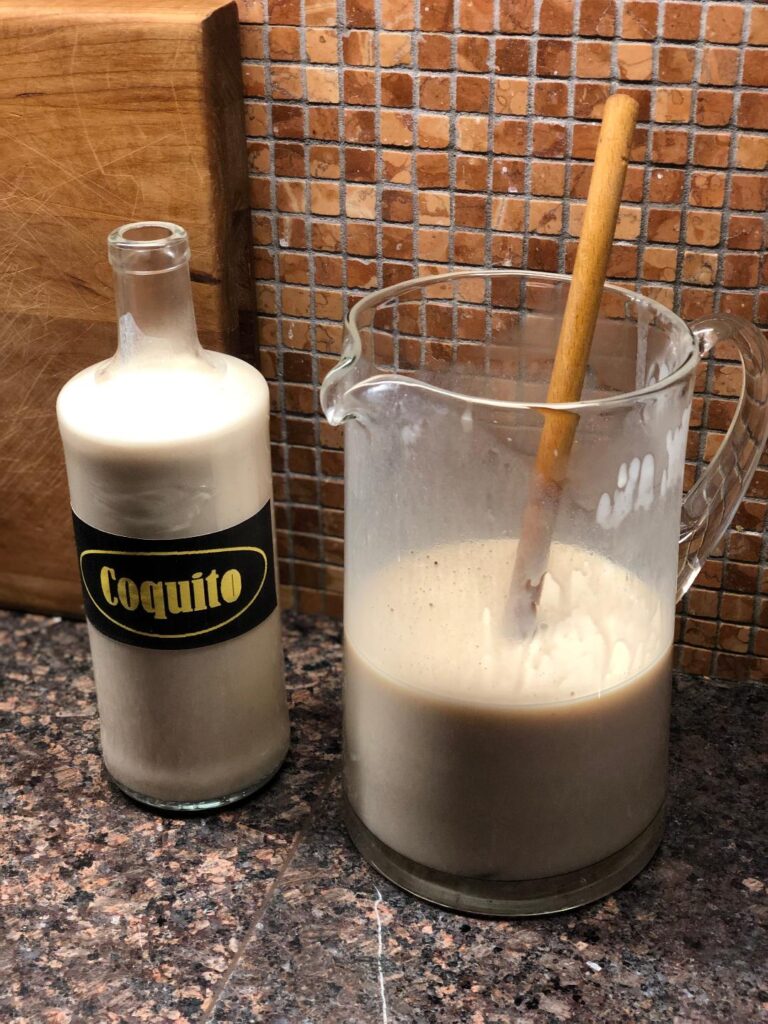 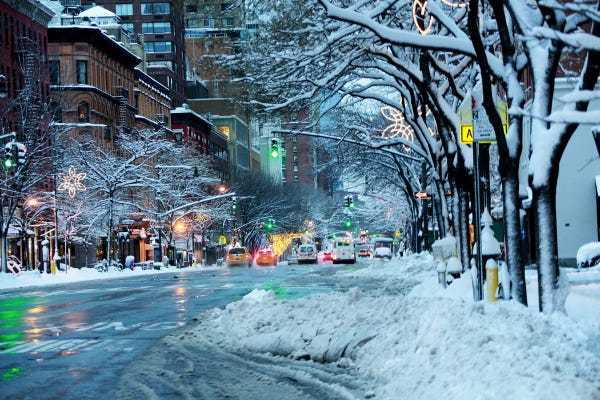 Whatever you celebrate, I hope I have it covered. Have a happy . . . 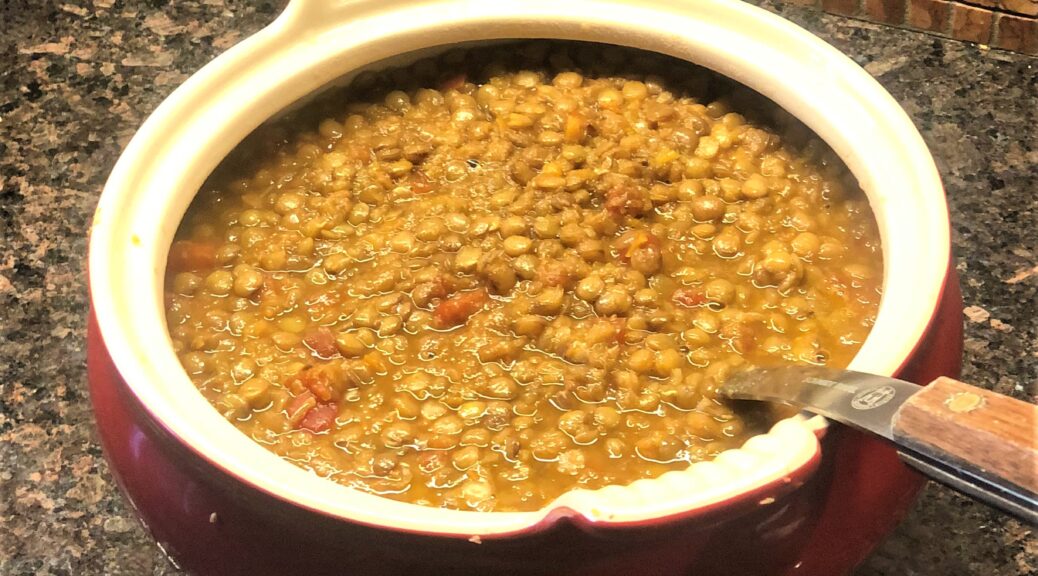 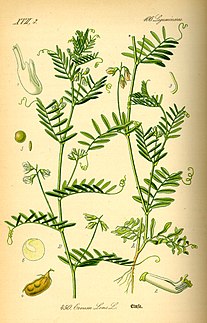 Here’s a simple lentil soup recipe. My doctor goes over my diet each time I see her for an annual physical. She inevitably tells me that I eat too much meat and not enough vegetables. Well, this should make her happy.  And if you replace the chicken stock with vegetable stock it would be vegan. According to Medical News Today lentils really are pretty healthy. 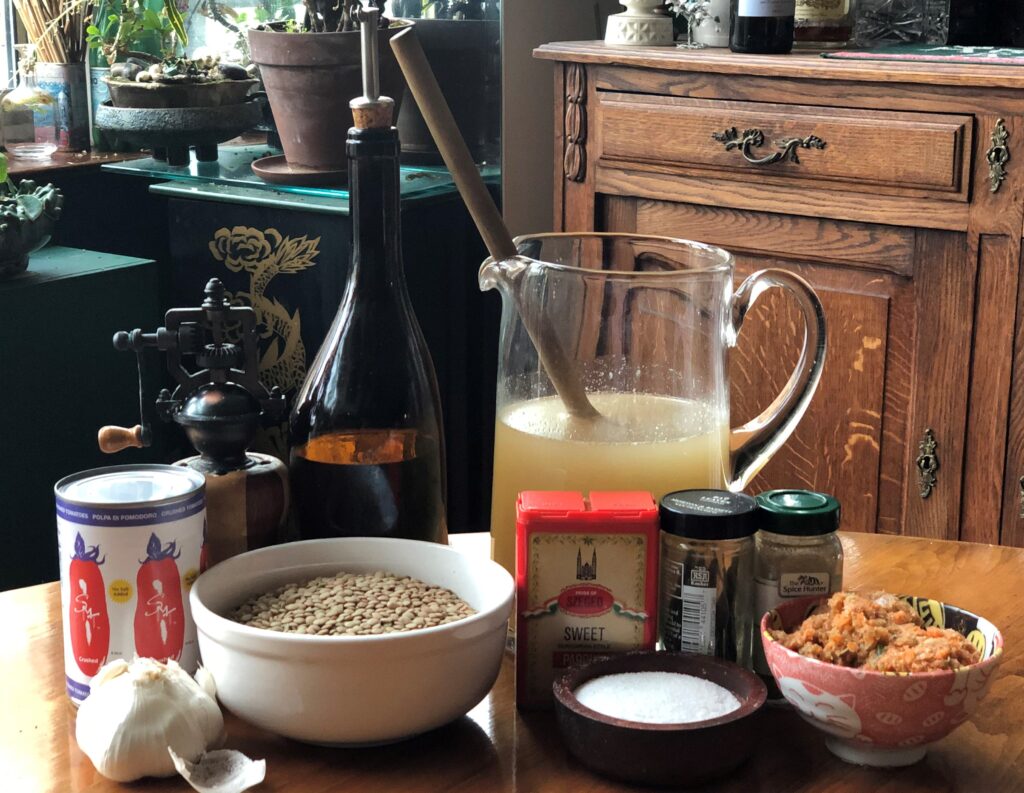 Heat oil in a large pot over medium heat. Add garlic and cook for a few minutes. Add the trinity and cook for 10 minutes until it begins to dry. 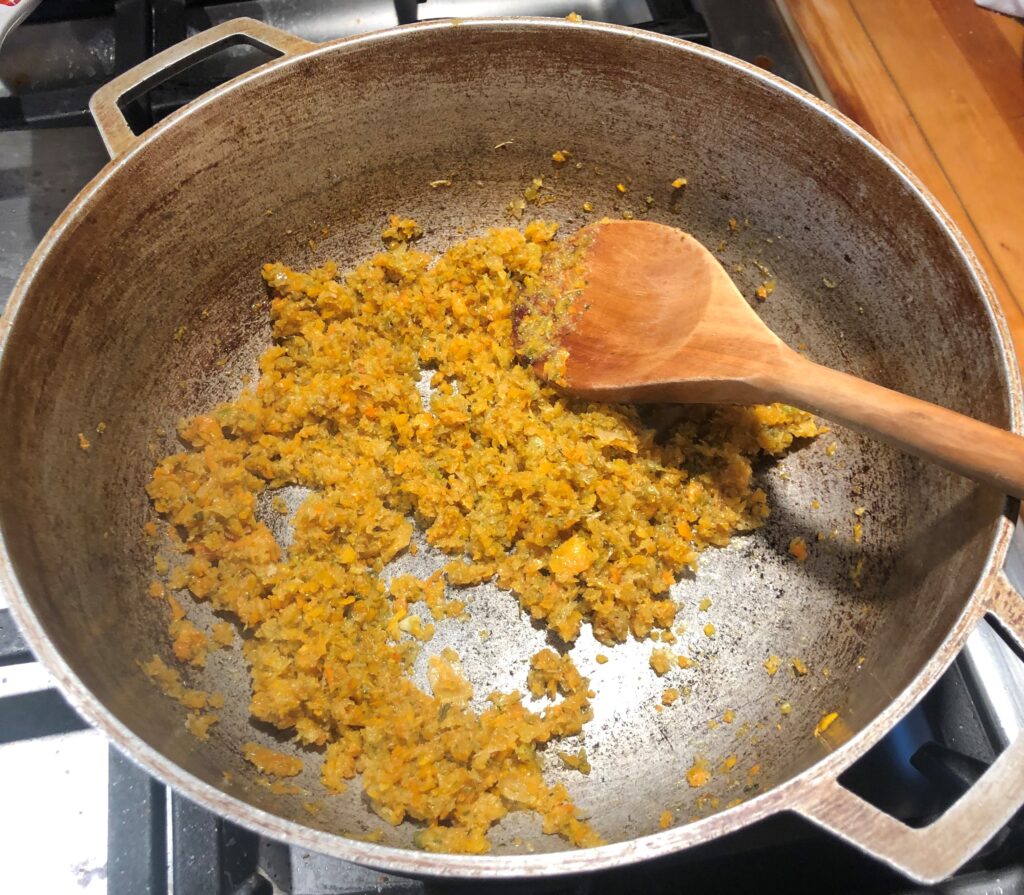 Add all remaining ingredients and stir. Bring it to a boil and then lower the heat to a simmer. Cover the pot and cook for 45-50 minutes or until lentils are soft. 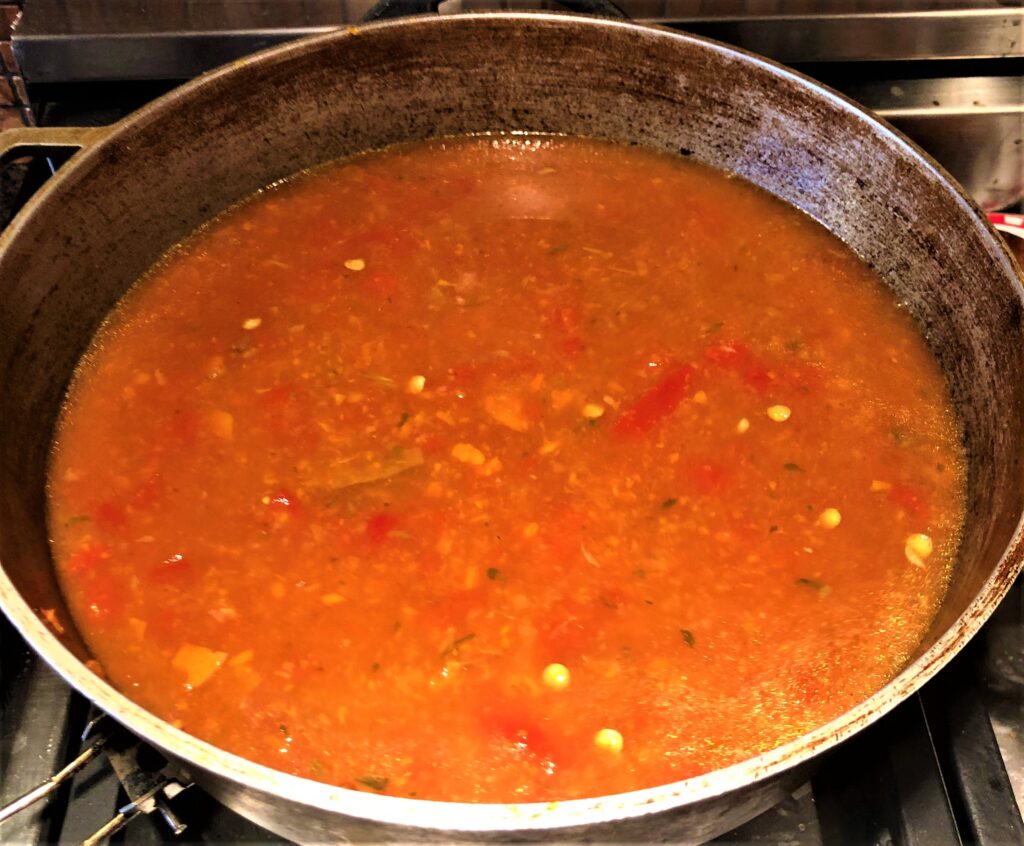 Remove bay leaves and take a cup of the soup and put it into a blender. Blend until it’s smooth and put it back into the pot. 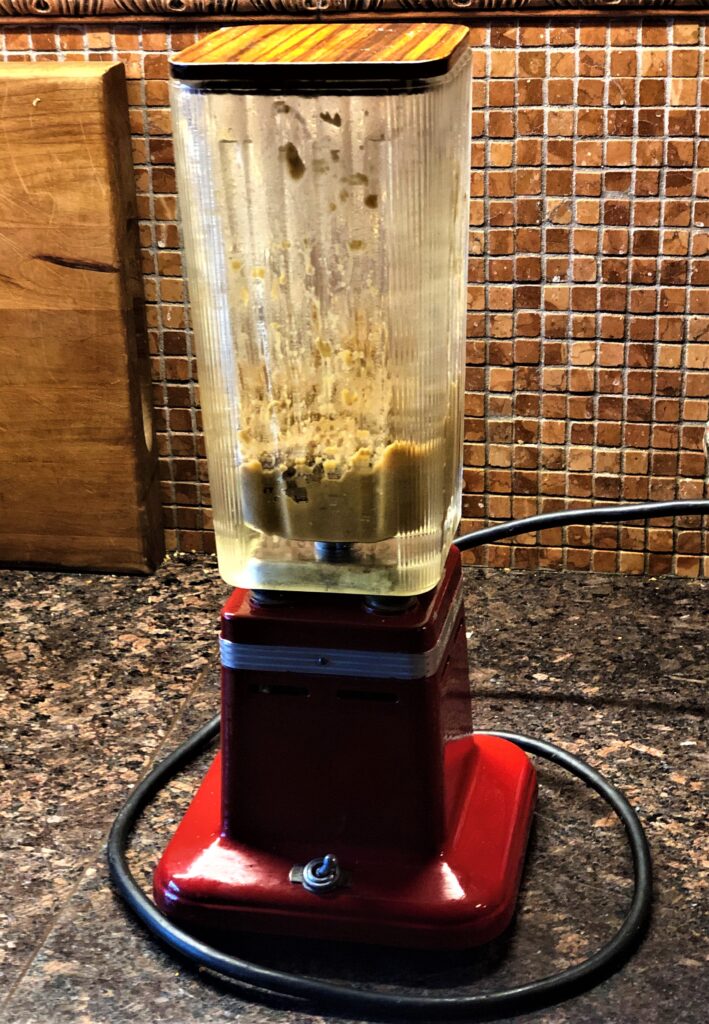 Taste for seasoning. If the soup is too thick add some water. 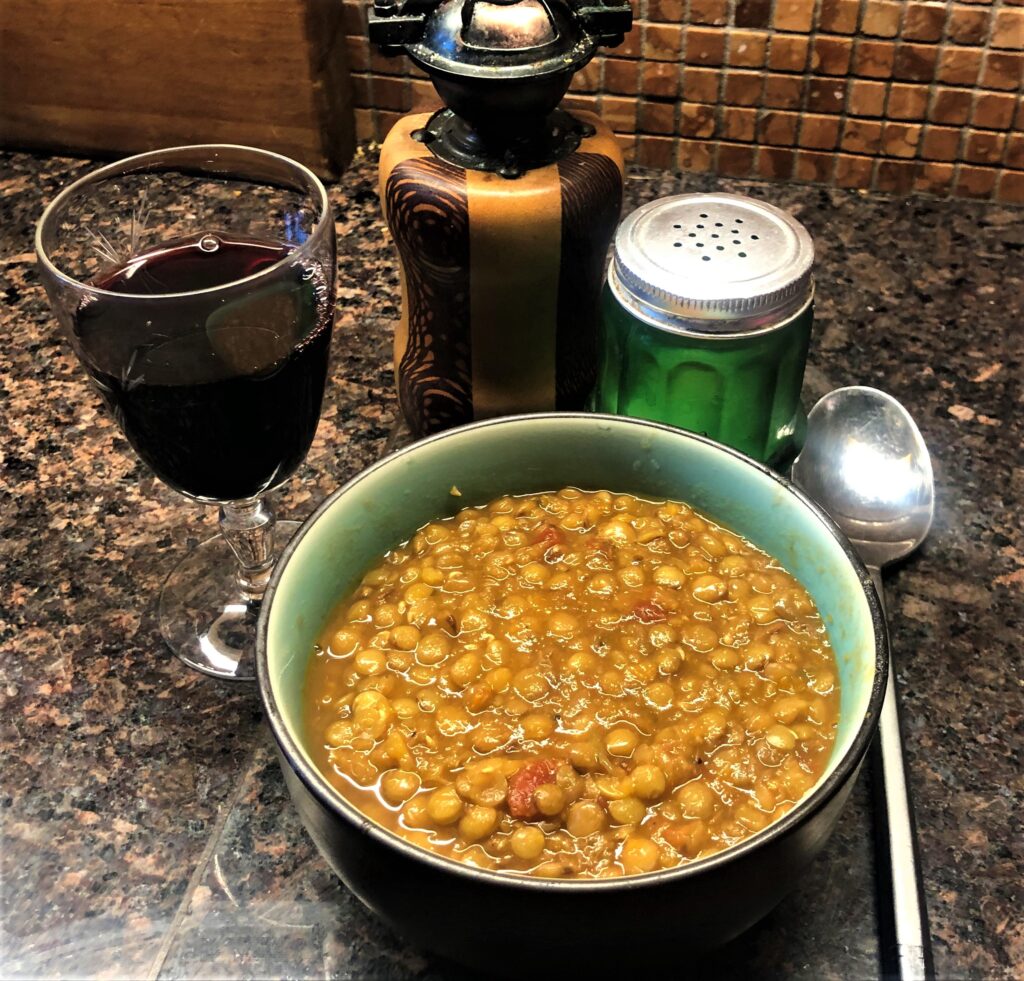 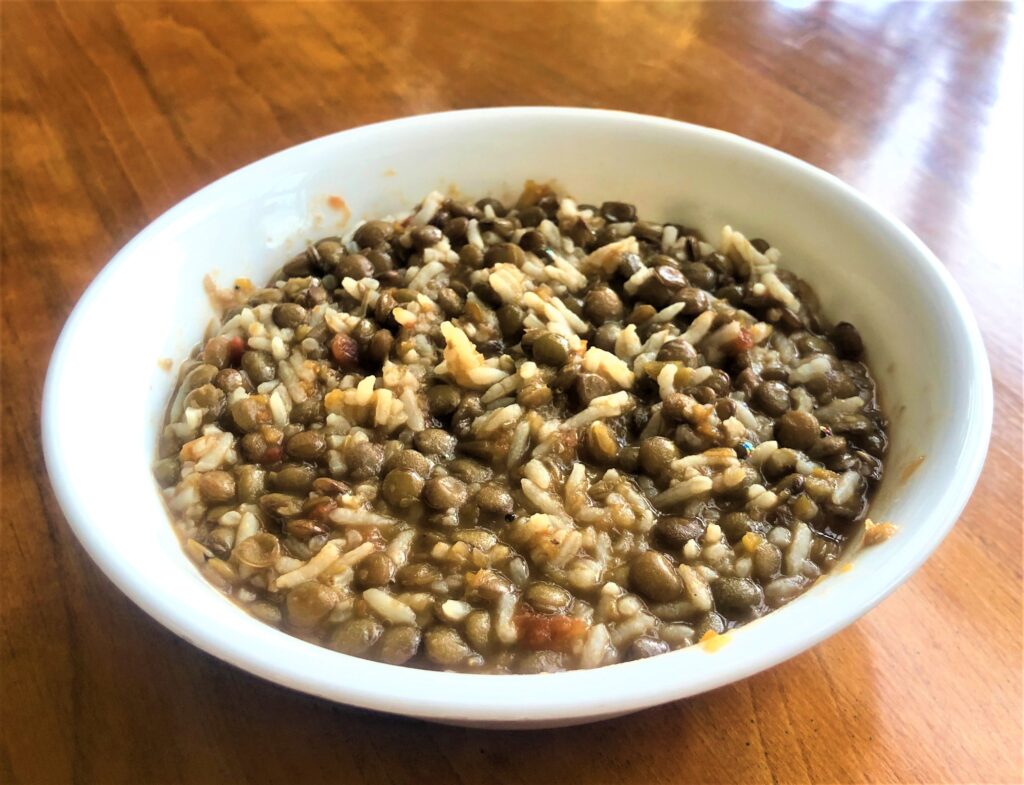 For a variation you can stir in some cooked white rice when the lentil soup is almost done. 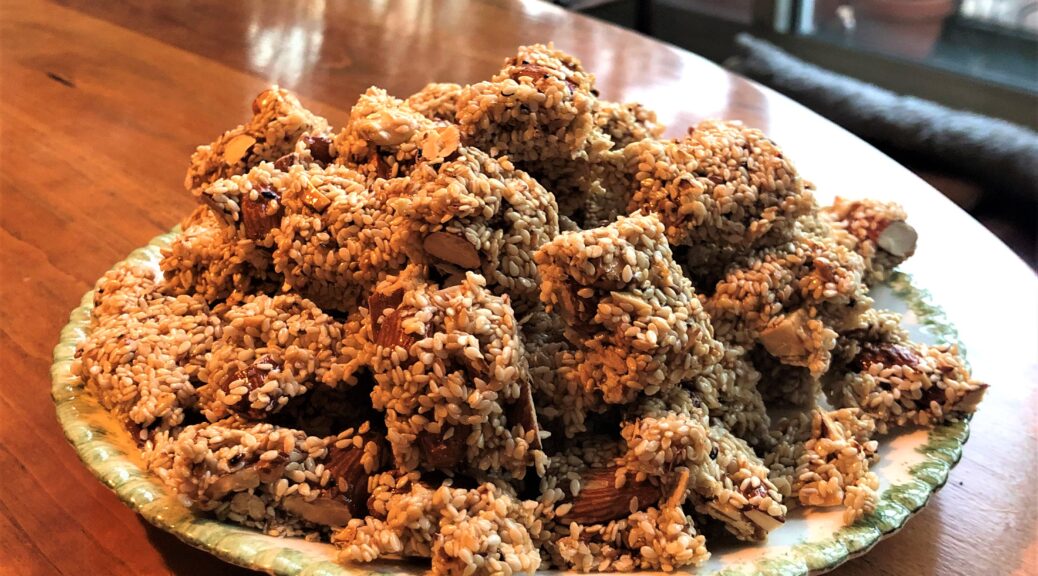 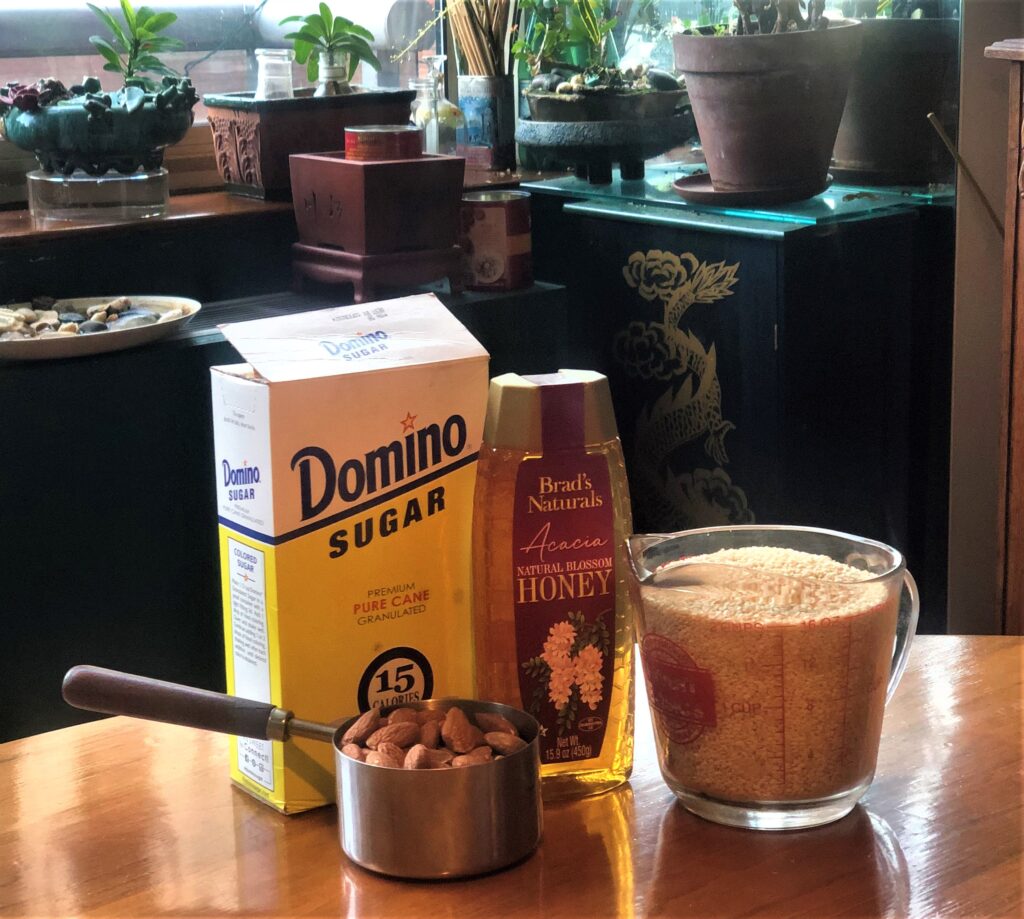 Put the honey and sugar in a pot over low heat. Stir for a few minutes until it’s blended. 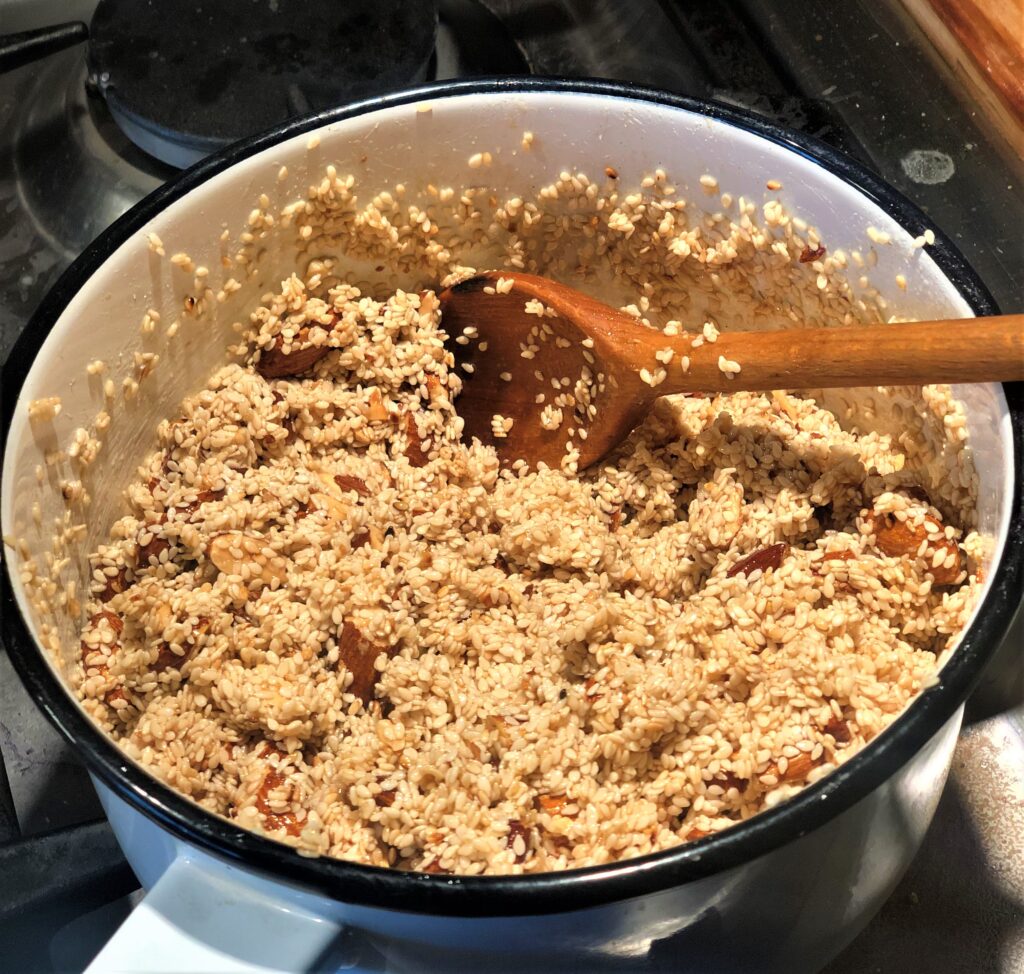 When it’s done, pour the mixture on a lightly oiled counter and flatten it until it’s about ½ inch thick. 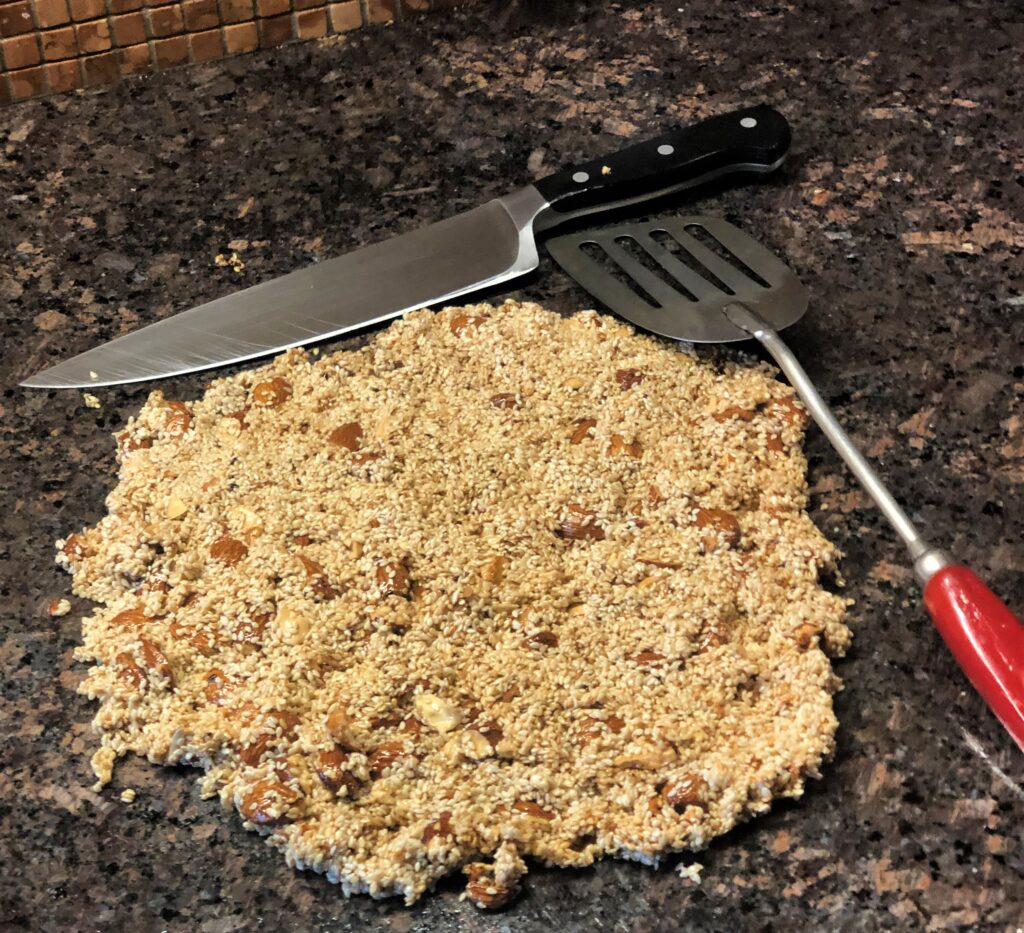 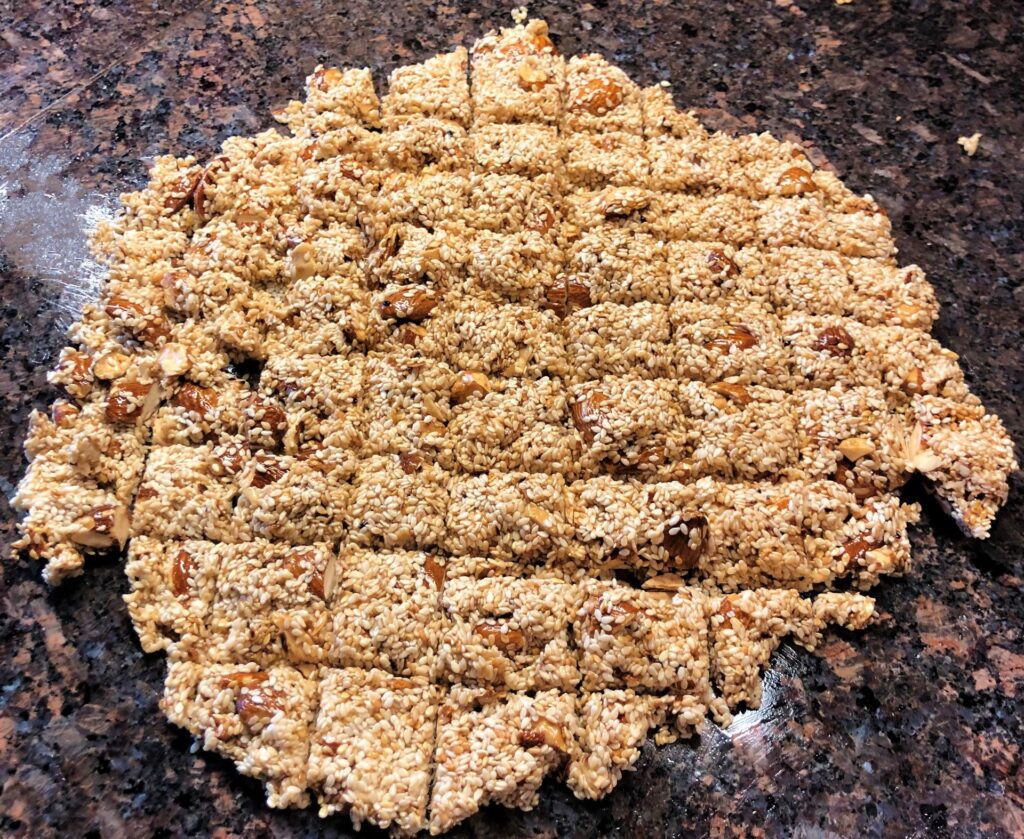 Cut it with a knife into bit sized pieces and let it cool to room temperature. 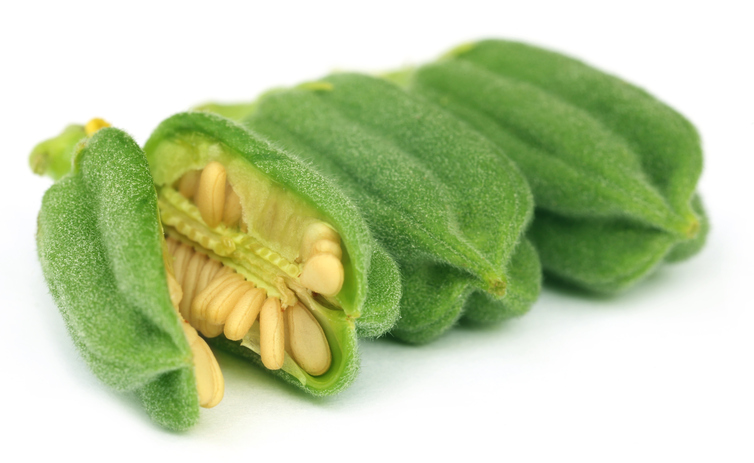 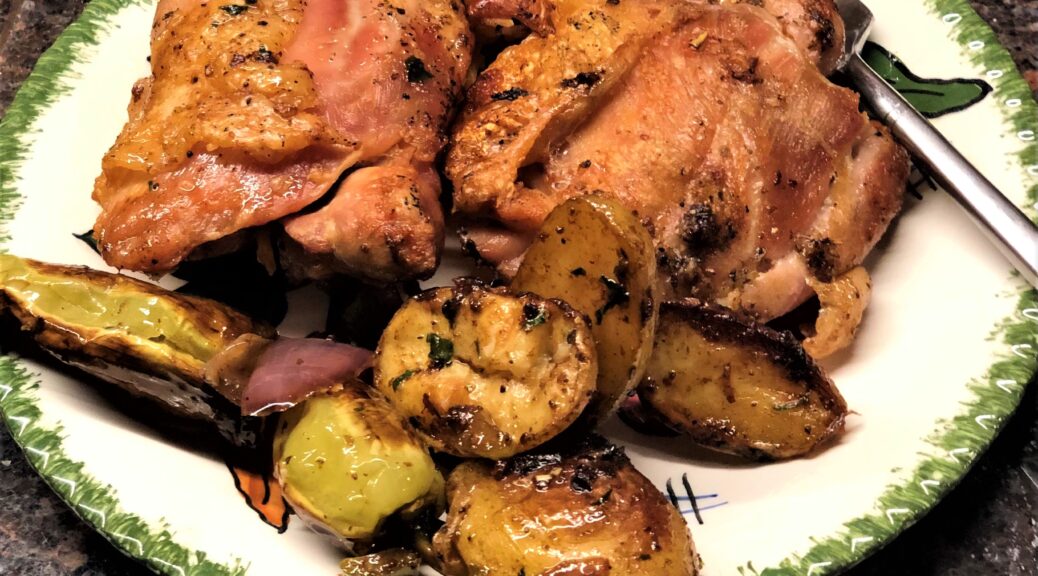 This is adapted from a recipe created by Grant Melton that I found in Bon Appetit. It’s something like a sheet pan roast but with a couple of extra steps. The chicken retains its crisp skin and the vegetables cook in olive oil, brine, and chicken fat. 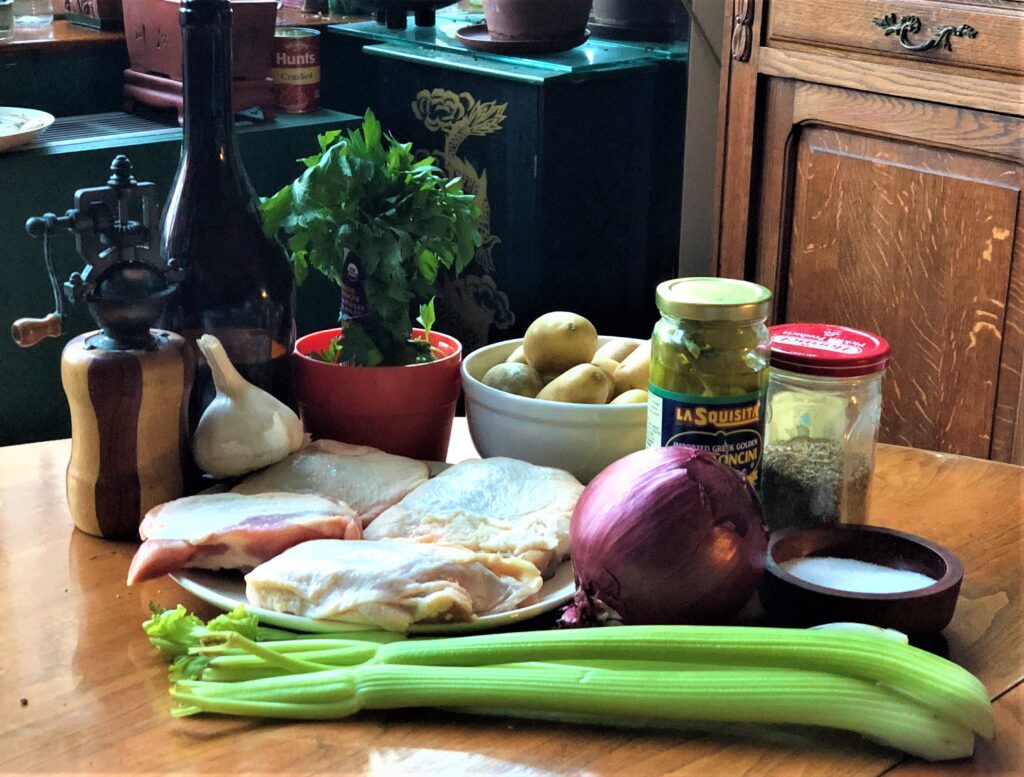 Season the room temperature chicken with salt and pepper. Heat 2 tablespoons of oil in a large pan, Place chicken in the pan and cook for 13-15 minutes without turning. 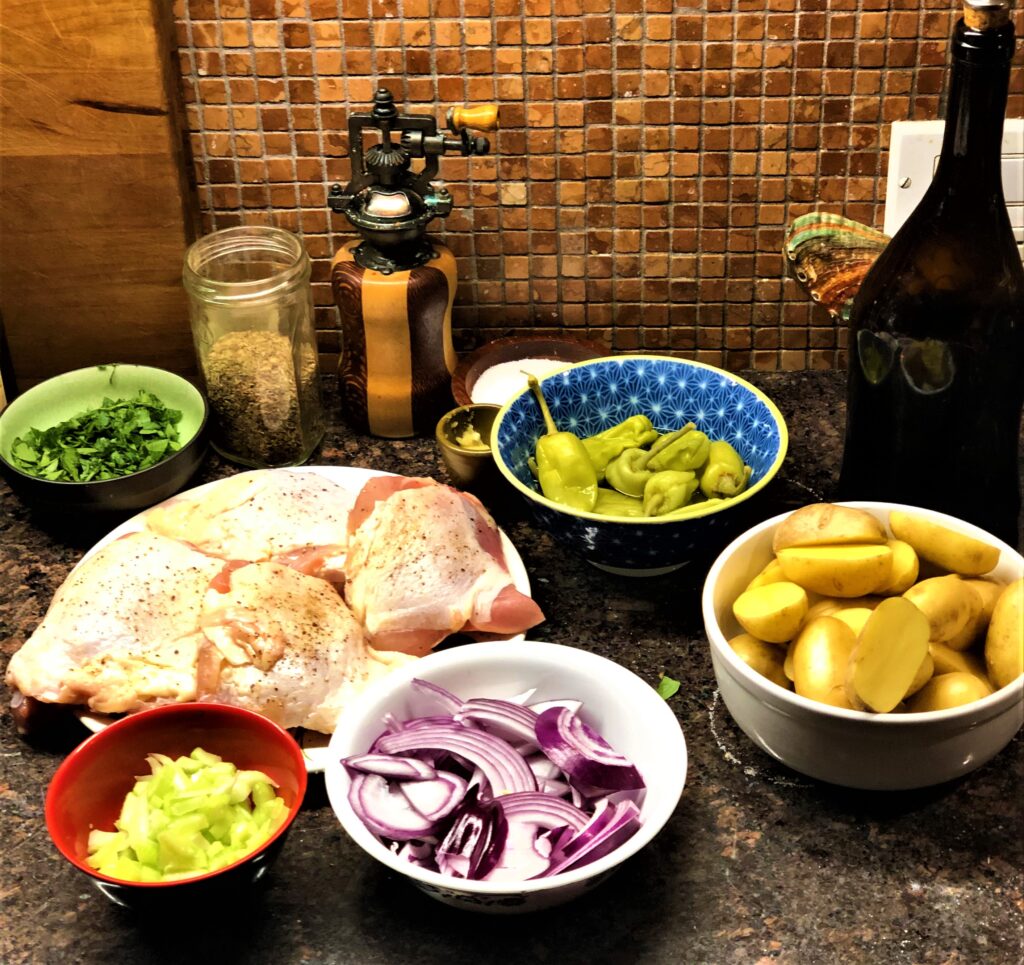 In the meantime, toss the potatoes, peperoncini, garlic, oregano, the remaining 2 tablespoons of oil and salt and pepper in a large bowl. Set aside. 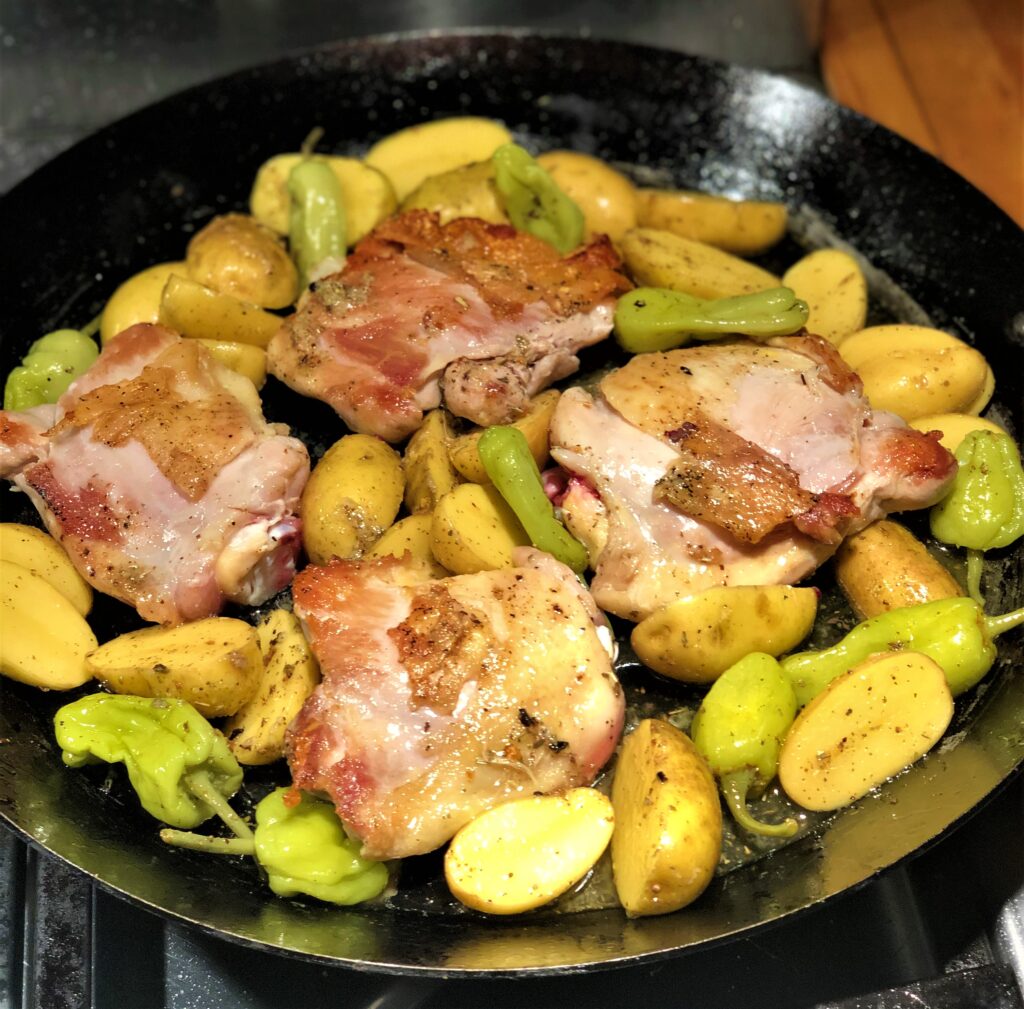 Turn the chicken skin side up and arrange the potato mixture around it. Pour the peperoncini liquid around it and give the pan a shake to distribute it. Put the pan in the oven and cook for 40 minutes. 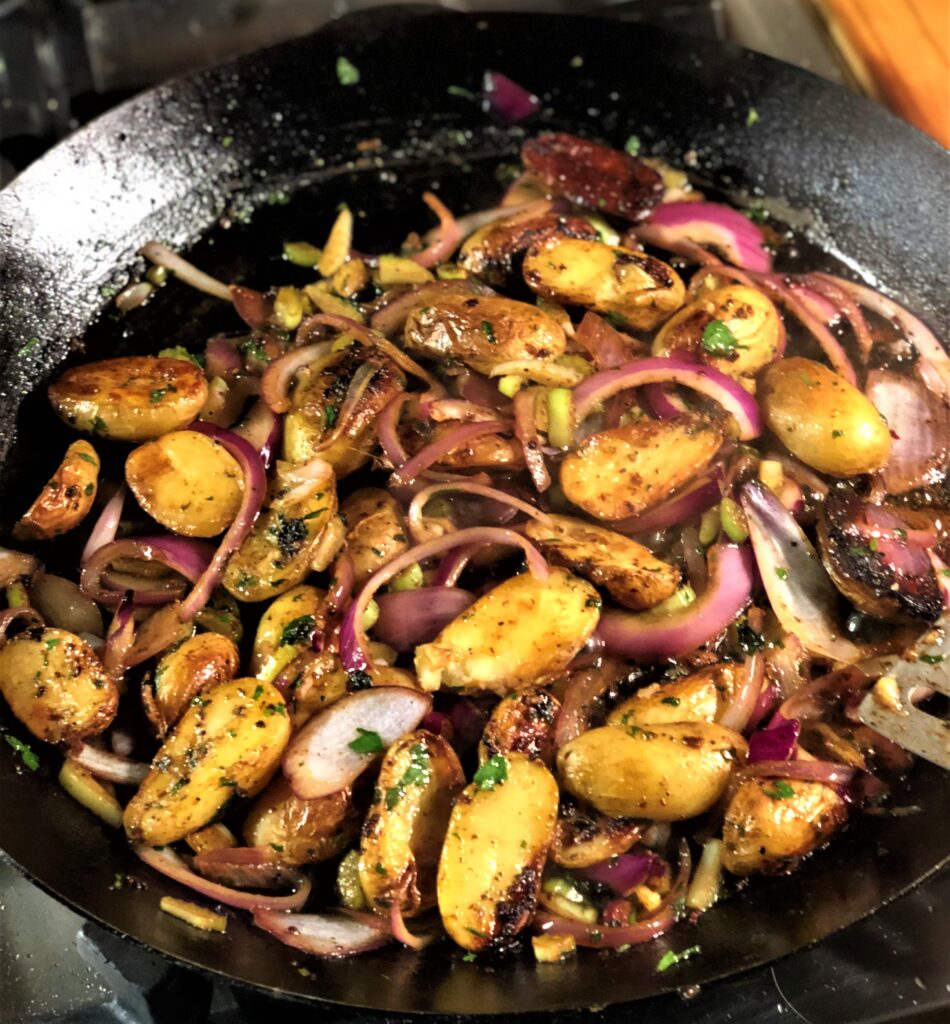 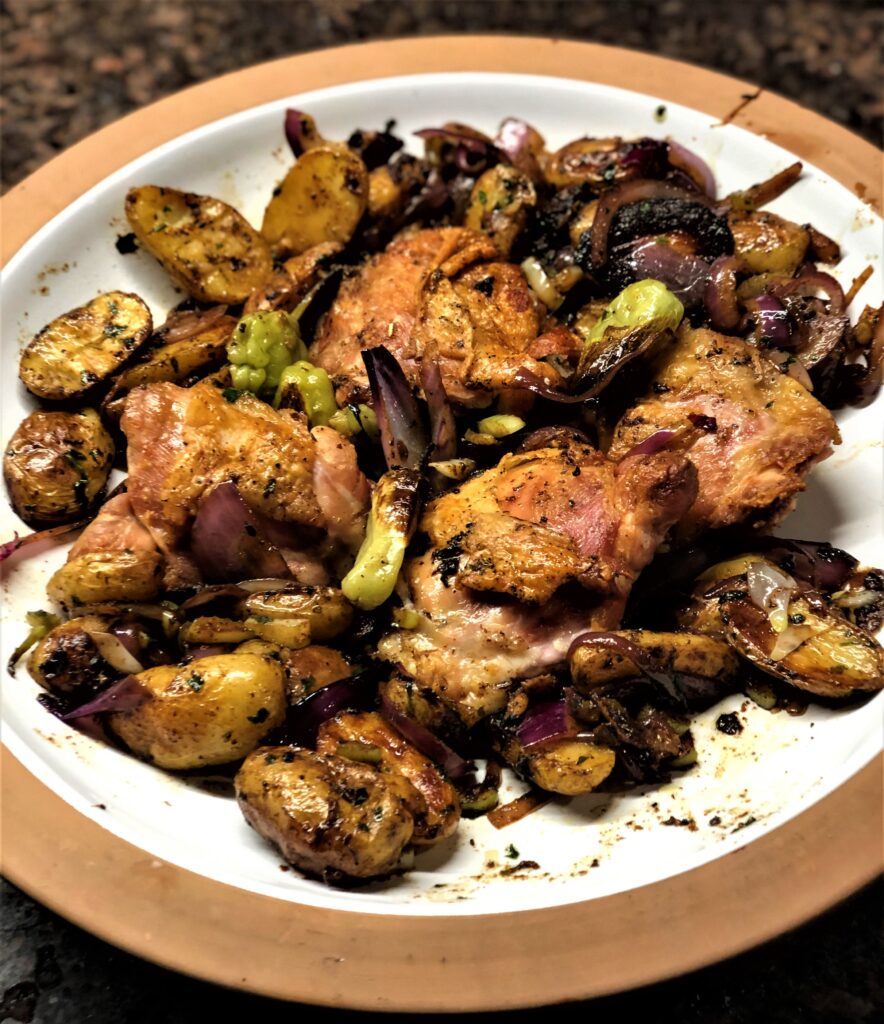